Sports column: These are the game shows we need 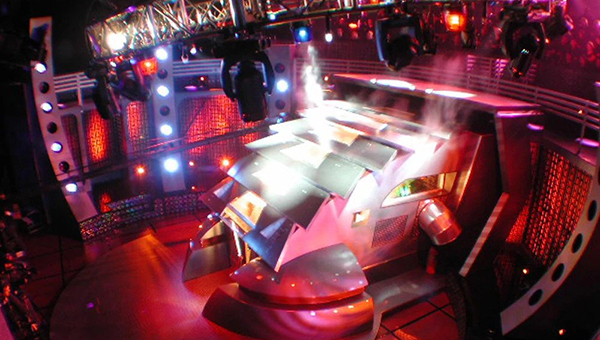 "The Chamber," from the short-lived 2002 game show of the same name, subjected its contestants to a series of physical endurance challenges. (From Wikipedia)

In one of the Facebook groups I frequent, a recent discussion turned toward great game shows of the past.

“Press Your Luck” was the game that sparked the topic, and its Whammys and hypnotic board are certainly a worthy entry to the game show hall of fame. Other stalwarts like “Jeopardy!” and “The Price is Right” are even a step beyond that, with a place on the Mount Rushmore of game shows.

As enjoyable as those are, it got me thinking about some of the shows where physical stamina was more important than knowing the exact cost of a can of chili. These were shows that asked their contestants to put in an honest day’s work and earn their riches by being physically punished or challenged.

My favorite of this genre was a short-lived 2002 show called “The Chamber,” which threatened to actually kill its contestants.

The winner of a quick question-and-answer round got to go into one of two torture chambers, either hot or cold. Each chamber vibrated and spun during the round and subjected contestants to intense heat (up to 170 degrees) or cold (minus-20 degrees) while air cannons blasted 140 mph wind at them. The cold chamber also had water jets to add a layer of ice to the contestant, who was clad in a T-shirt and shorts.

The object was to survive through eight rounds, or 10-15 minutes, with the intensity of the heat or cold ratcheting up in each round. They also had to answer questions to earn prize money during the physical torture. If they missed enough questions, their heart rate went too high, or they simply quit, the game was over.

Sadly, some viewers looked at this as barbaric rather than fun for the whole family. Complaints, along with low ratings, led to the show’s cancellation after only three episodes. All that seems to exist now are some grainy VHS dubs on YouTube.

Speaking of torture, there was an entire genre of shows in the 1980s and 90s that seemed designed to maim or at the very least humiliate 12-year-olds. The physical challenges of “Double Dare” come to mind, in which contestants often flopped off of ladders to grab flags and tried to run through slippery slime that would shred the ACLs of most adults.

“Legends of the Hidden Temple” was another of this genre. In the prize round, contestants had to wind their way through an ancient temple (actually a cramped maze on a soundstage in Orlando) to assemble a stone (foam) idol in about two minutes.

The only way to win was to be a caffeinated 12-year-old with the cardio conditioning and stamina of an Olympic athlete, along with the luck of a leprechaun.

Which brings us to the final stop on this tour, the genre in which contestants actually did compete against professional athletes — the Pros vs. Joes class of game shows, named for the Spike TV show of the same name.

Basically, the object of Pros vs. Joes was to take an above-average athlete and see if they could beat the pros at their own game. A baseball fan, for example, had to try and get a hit off of former major league pitchers. A football fan could win his challenge by tackling Bo Jackson or keeping Jerry Rice from catching a pass.

It was a simple and fun enough concept, but then in 2015 “Beat the Champions” aired on Fox and took it to the next level. Building on the Pros vs. Joes concept, it evened the playing field for the average Joes by handicapping the pros.

One guy, for example, had three chances to keep Rob Gronkowski from catching a pass. They went one-on-one on the first try for $100,000, and the Joe got more and more help on each attempt. For the final try, Gronk had to catch a touchdown pass while being guarded by 40 members of a church choir. The Joe wound up winning $25,000 when Gronk’s brother threw a hail mary pass into the choir on the final attempt. Gronk would have won the jump ball, but the pass was high and a little long.

I am not making this up.

Olympic swimmer Missy Franklin competed in a 50-meter sprint against what I presume was a decent high school swimmer. Franklin’s handicaps eventually had her swimming with milk jugs tied to her ankles, while a fire hose blasted water against her, and another hose pushed her opponent the opposite direction. Franklin still won every race fairly easily.

This one-off special never was turned into an ongoing series, but should have just to see what sort of absurd handicaps the producers could have come up with. Maybe they could have partnered with the creators of “The Chamber” and started amputating limbs in Season 2.

So let’s pour out a bottle of Gatorade for what could have been. In an alternate universe I’m pretty sure “The Chamber” evolved into “The Running Man” and kids shows like “Double Dare” resulted in slimy television producers clearing out foreign orphanages in their ongoing quest for contestants.

In this universe, they just faded away into the dustbin of television history.