Bulldogs knock off Notre Dame, get back to College World Series 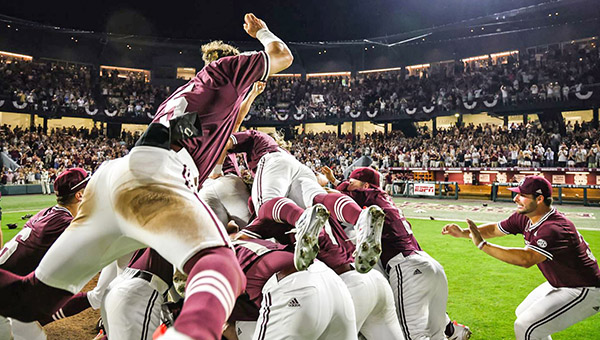 STARKVILLE — A packed crowd alternated between full-throated cheers, clanging cowbells and nervous breaths. In the dugout, Mississippi State’s players waited anxiously for the final out that would trigger a celebration from both players and fans.

When the moment finally came, the Dude and the Bulldogs both abided.

Mississippi State scored six runs in the second inning to build a huge lead, padded it in the middle innings, and then held on late to beat Notre Dame 11-7 in Game 3 of the NCAA Tournament’s Starkville super regional on Monday.

The Bulldogs (45-16) earned their third consecutive trip to the College World Series, which is the longest active streak in college baseball.

Mississippi State advanced to the CWS for the 12th time overall, and fourth time in nine seasons. It will play No. 2 national seed Texas (47-16) in its Omaha opener Sunday at 6 p.m. Mississippi State beat Texas 8-3 in the first game of the season, Feb. 20 in Arlington, Texas.

Virginia and Tennessee will join Mississippi State and Texas on one side of the CWS bracket, and will play Sunday at 1 p.m. The other half of the eight-team field includes North Carolina State, Stanford, Vanderbilt and Arizona.

“Obviously when you decide to go to Mississippi State, you’re going to a program where that’s the aspiration. That’s why we have the ballpark we do, the fanbase we do,” Mississippi State coach Chris Lemonis said. “Our goal was to keep it moving and keep it moving forward. The nice part is all these young players in the program right now have experienced it and they want it. That just continues to grow and sets the expectation higher.”

Mississippi State bounced back from a 9-1 loss in Game 2 of the super regional by outslugging Notre Dame (34-13) for the second time in three days. MSU won Game 1 of the best-of-three series on Saturday, 9-8.

A crowd of 11,754 cheered on the Bulldogs on Monday, bringing the three-game series total to an NCAA-record 40,140. The single-game on-campus record was set Saturday, with a crowd of 14,385

Each team scored a run in the first inning Monday, and then the Bulldogs took control in the second. Twelve batters came to the plate as they scored six runs — three of them on a home run by Logan Tanner — to take a 7-1 lead.

Tanner Allen added a solo home run in the third inning, and back-to-back RBI doubles by Brad Cumbest and Kellum Clark made it 10-2 in the fourth.

Notre Dame did not go away quietly. Ryan Cole hit an RBI single and Carter Putz a two-run double in the fifth inning to cut it to 10-5. In the seventh, Niko Kavadas blasted a mammoth two-run homer that made it 11-7.

Mississippi State closer Landon Sims retired five batters in a row after Kavadas’ home run, then faltered a bit in the ninth. The Irish put two runners on base with back-to-back singles to start the inning.

Sims struck out Jared Miller for the first out, which brought Kavadas to the plate again. Kavadas hit the second pitch from Sims, but this one only went about 100 feet. It was a sharp grounder to second baseman Scotty Dubrule, who flipped to shortstop Lane Forsythe, and Forsythe in turn fired to first baseman Josh Hatcher for a game-ending double play that set off yet another super regional dogpile for the Bulldogs.

Sims (4-0) pitched four innings of relief to match his longest out of the season and was credited with the win. He allowed two runs, both on Kavadas’ home run, and struck out four.

Notre Dame has not been to the College World Series since 2002, and was in its first super regional since that season.