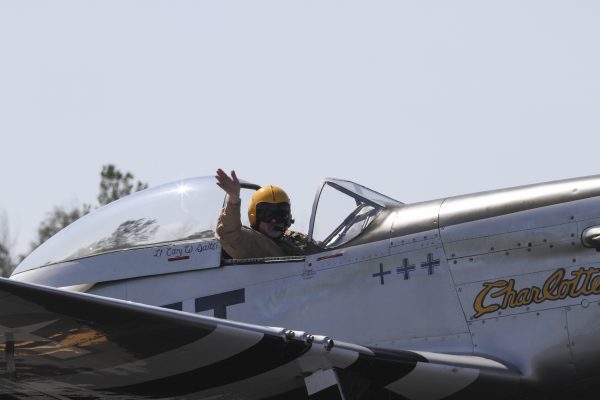 Dan Fordice waves to the crowd after landing his P-51 Mustang during the Southern Heritage Air Foundation's 2018 Best Little Airshow in the World at the Vicksburg-Tallulah Regional Airport. (Courtland Wells/The Vicksburg Post)

Vicksburg resident Dan Fordice has been named a recipient of the American Spirit Medallion for his work in preserving the history of World War II and helping wounded veterans through the Warrior Bonfire Program.

The National World War II Museum presents the medallion annually to people who exemplify the highest standards of integrity, discipline and initiative while making unselfish contributions to their community, state or nation.

“It’s a great honor,” Fordice said. “The World War II Museum is a tremendous facility. I do a lot of work with them and it is a very great honor to be honored by them for anything. They are continually year after year voted the second-best museum in all the country. It is a tremendous place.

Fordice is the founder of the Southern Heritage Air Foundation, which preserves the history of World War II with displays of the experiences of local veterans and period aircraft. He is also the founder of the Warrior Bonfire Program, which helps improve the lives of combat-wounded veterans.

“His work assisting Purple Heart recipients heal emotionally and physically has been invaluable to combat veterans as they return home from the battlefield,” Watson said. “I have also had the good fortune of observing firsthand Dan’s passion for restoring and piloting vintage aircraft as a way to honor the men and women who flew and built them. Simply put, Dan is a great American who has lived his life in service to others.”