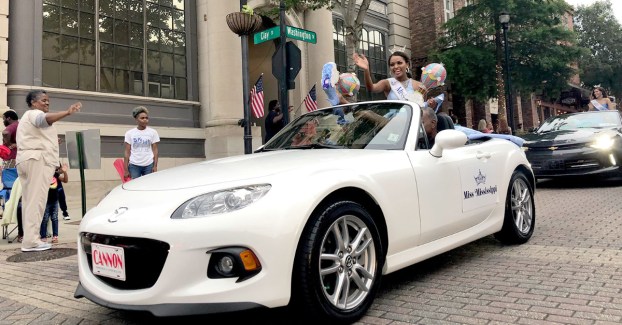 It’s been a while since Vicksburg has had a parade.

Covid shuttered everything for more than a year.

But with the rollout of the vaccines, everything is getting back to normal and on Monday, spectators will have an opportunity to line the streets for the Miss Mississippi parade, which will kick off at 7 p.m. on Washington Street.

This year 39, candidates will be competing for the title.

David Blackledge, Miss Mississippi Corporation executive director, said most of the candidates who were poised to compete last year are returning.

“There were only a few who had other obligations,” Blackledge said.

While the competitions do not begin until Wednesday night, all 39 of the candidates made their way to the River City Saturday, for the crowing of their Magnolia Belles and Beaus.

The Magnolia Belles and Beaus is a program designed to give boys and girls from ages 7 to 10 the opportunity to have their own Miss Mississippi experience. Each Belle or Beau works with and is mentored by Miss Mississippi candidates throughout the year.

During the competitions, the Belles and Beaus have the opportunity to share the stage with their respective candidate during the red carpet phase. They are also part of the production.

The Miss Mississippi preliminary competitions will begin at 7 p.m. on Wednesday, Thursday and Friday with the final night of competition, where the top 10 will be named and re-compete, beginning at 8 p.m. Saturday. All competitions will be held at the Vicksburg Convention Center, 1600 Dr. Briggs Hopson Blvd.

Tickets for all four nights of the competition are $125 and are available at the Miss Mississippi Corporation office, 820 South St. on the fourth floor or by calling 601-638-6746.

This year, the Miss Mississippi competition will also be live-streamed, and Blackledge said packets will be available to buy “much like Pay-Per-View” for $15 a night or $36 for all nights and are available at missmisslive.com.

The last night of the competition will be televised on WLBT.

Other events planned for the week include autograph signings, which are scheduled to begin at 10 a.m. Wednesday at George Carr Buick GMC, 2950 S. Frontage Road, and at 10 a.m. Thursday in downtown Vicksburg stores.

In years past, an autograph party was held following the parade, but this year there will only be the two listed autograph sessions. To ensure candidates remain safe during the week of competition, social distancing will be observed at all autograph parties, which means there will be no photographs taken during the events, Blackledge said.

‘We are not raising taxes’: Vicksburg-Warren School District says local school taxes will not be raised this year

Following community pushback due to the language of a recent display advertisement, the Vicksburg Warren School District board of trustees... read more