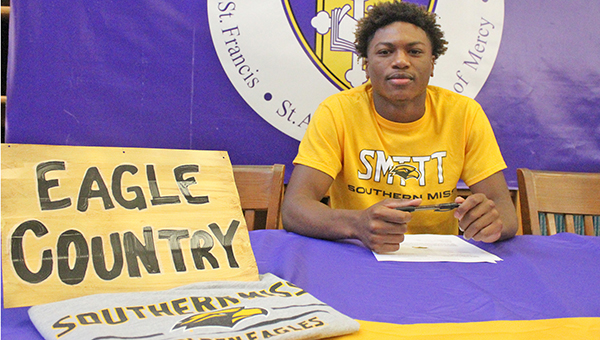 For years, Brennon Williams has sacrificed time, energy, even a bit of fun to work toward a bright future. The future has finally arrived.

The St. Aloysius track star, who won five state championships during his high school career, took his talents to the next level by signing with Southern Miss on Tuesday.

“I’m proud, because it took a lot of work. We spent a lot of time and effort training every day. There’s a lot more to it than just running. You have to do a lot off the field, like eating right and taking care of yourself,” Williams said.

Williams won 10 state meet medals overall, as well as five championships in four different events, in three seasons. He likely would have won more had the 2020 Mid-South Association of Independent Schools state meet not been canceled because of the COVID-19 pandemic.

He had some other numbers that were just as impressive — a 3.85 grade point average and a score of 25 on the ACT. Williams plans to major in computer science at Southern Miss, and he said academics played as a big a role in his decision to sign there as did the opportunity to continue his track career.

Going to a junior college first was only a passing thought, he added. Signing with a Division I program is a dream come true.

“It’s a good opportunity to be part of a D-I program and help pay for school. It’s life changing,” Williams said. “Everybody wants to play D-I. My ninth-grade year I knew, because I was running with the top ninth-graders in the state. I thought as long as I could keep getting better, then I should have a pretty good chance.”

Williams is the second St. Aloysius track athlete this year to earn a college opportunity. Natalie Burke accepted an offer to compete next season at Division III Millsaps, which does not offer athletic scholarships.

“I’m just glad to have my name up there with everybody else. St. Al, over the last five years, has built a really good track program. I’m just glad to be a part of it,” Williams said.

Williams’ coach, Michael Fields, praised his latest track star for the hard work he put in during his high school career.

“To get to that level takes a lot of sacrifice. When other kids are out partying and doing things, he’s having to be at home sleeping and taking care of his body. But this is why you do those things, is so you can get to this point,” Fields said. “He’s always an academic guy first. Track was the fun part of it. He knew how to put his priorities in place.”