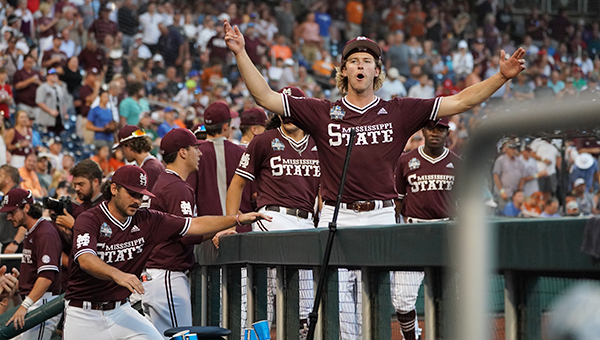 Mississippi State players celebrate in the dugout during their 6-5 win over Virginia in the College World Series on Tuesday. (Courtesy of the NCAA)

OMAHA, Neb. (AP) — Once Kellum Clark got that first hit, Mississippi State was on its way to another College World Series win.

The sudden turnaround gave the Bulldogs (47-16) control of their bracket and left them one win away from reaching the best-of-three finals next week. They’ll play again Friday night, against the survivor of an elimination game Thursday between Virginia and Texas.

“We talked to the team about how it’s hard to get the last outs in Omaha, and just to keep fighting, keep fighting, get something going, and we were able to do that,” coach Chris Lemonis said.

McGarry, who was trying for the first CWS no-hitter since 1960, walked Scotty Dubrule leading off the eighth before Clark drove a 93 mph fastball into the right-field bullpen.

Clark’s fourth homer of the season ended a 22-inning shutout streak for Virginia (36-26) along with McGarry’s night — and marked the start of the Bulldogs’ offensive push.

“I don’t think it was a gut punch. I mean, that’s just baseball,” McGarry said. “It’s a game that can go back and forth, and Mississippi State got the best of us tonight. I’m hoping we play them again.”

Zach Messinger came on and surrendered a pinch-hit single to Josh Hatcher before Rowdey Jordan doubled to the wall in left-center.

Hatcher, who hadn’t been in a game since May 27, inexplicably stopped at third when he could have scored easily. Jordan was forced to stop halfway to third, put his arms up in frustration, and then was able to make it back to second base.

Hatcher’s baserunning error didn’t matter in the end. Stephen Schoch (4-2) relieved, and Allen sent his second pitch into nearly the same spot in the right-field bullpen that Clark had found for a 5-4 lead.

Dubrule added an RBI single off Nate Savino for an insurance run that stood up after Virginia’s Chris Newell homered in the bottom half.

Lemonis had jokingly asked Allen midway through the Bulldogs’ game against Texas on Sunday if he planned to help out the team.

Allen is the Southeastern Conference player of the year and he came to Omaha batting .392. He went 0-for-4 against Texas, and he flew out and struck out twice in his first three at-bats against McGarry.

“I knew they weren’t going to throw me a fastball,” Allen said, “so I was looking for a slider I could do some damage with. It was a big sigh of relief. I hadn’t had a hit in a couple days. But honestly it really doesn’t faze me. It’s about the next at-bat.”

McGarry, who was relegated to the bullpen amid struggles with his control and returned to the rotation for the NCAA Tournament, took a no-hitter into the seventh inning in his super regional start against Dallas Baptist.

The senior right-hander again had good command of his fastball, working both sides of the plate and up in the strike zone, and he effectively mixed in his breaking ball and changeup. He walked two, hit a batter and struck out eight in his 98-pitch outing.

“It’s just unfortunate for him that we just couldn’t finish it off because he was spectacular tonight,” Virginia coach Brian O’Connor said. “It’s too bad that it ended the way it did for him.”

Until Newell’s homer, five MSU relievers had held the Cavaliers scoreless after Christian MacLeod allowed four runs in 1 1/3 innings in his shortest outing in 22 career starts. Cade Smith (3-0) pitched an inning for the win and Landon Sims got four outs for his 12th save.

“I hate it for the kids to be on this stage and not have the opportunity to play their best,” Lemonis said. “Hopefully we’ll get a chance to get him back out there to pitch again.”