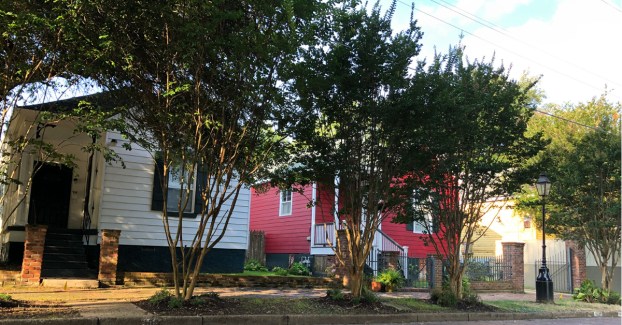 The house on the left of the photo is a late Queen Anne cottage designed by architect William Stanton and built in late 1892 for E. Moore.

It is one of three cottages, the other two in the photo to the right on First East, built by Moore at the same time. These three houses were built as a rental property and as such were occupied by a number of families. The house at 1022 First East St. was the home of Charles and Cilia Amborn from at least 1895 to 1904. Amborn was a jeweler who worked for Robert Ernst’s store for twelve years before opening his own store on Openwood Street in April 1894. While the three houses were constructed with the same plan, this house retains the most features of the original design. The door on the second house was moved and an addition was built at the rear. The third house was completely changed, removing the porch and window on the front and adding the porch along the west side.

1018 was the home of Warren Lavins, a machinist with the Y and MV Railroad and John Lavins, an editor with the Vicksburg Chronicle. In 1904, Joe and Minnie Riegelhaupt, grocers, lived in the house, followed by John and Wadie Abbott in 1921 (he was a carpenter with the government fleet), and in 1935 by George and Amy Johnson; he was a ship keeper with the U.S. Engineers shops.

After Mass last Sunday, I took a little drive around town with my family. We drove past other churches where... read more