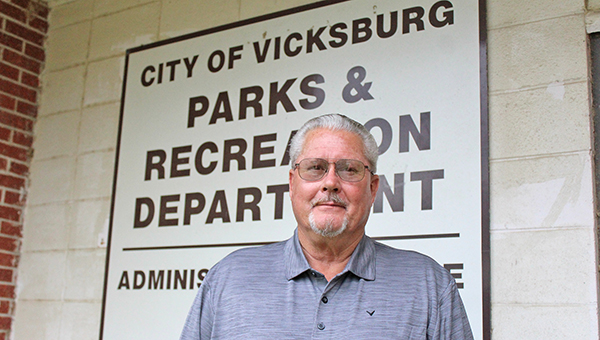 Joe Graves, the longtime director of the City of Vicksburg's Parks and Recreation Department, announced he will retire June 30. Graves has been in the job since 2004. (Ernest Bowker/The Vicksburg Post)

Over the past 17 years, Vicksburg’s recreational opportunities have multiplied and diversified.

From major projects like Sports Force Parks on the Mississippi, to smaller ones such as a disc golf course at Halls Ferry Park and a children’s summer camp, the city’s Parks and Recreation Department seems to have something for everyone these days.

And now, one of the people whose vision made that a reality, is stepping down.

Joe Graves, the city’s Parks and Rec director since 2004, has announced he will retire effective June 30. The 63-year-old said a combination of factors led to the decision.

“We’ve got a new administration coming in with new ideas, and it’s just time for me to find something different to do. I spent 22 years at St. Al and 17 years here,” said Graves, who was also St. Aloysius High School’s baseball head coach from 1982-2004. “I put a lot of time in, and worked hard in the community ever since helping kids and everybody I could to do the best I can. I’ve got a lot of friends that have helped me tremendously all the way through. I’ve put a lot of time in the community wanting to do stuff for the community and make their lives better. It’s time for me to start doing some things with the family.”

Graves led St. Al’s baseball team to nearly 250 wins, and a state runner-up finish in 2002. He left at the end of the 2003-04 school year and took the job heading up Vicksburg’s Parks and Recreation Department three months later.

At the time, the city’s facilities consisted mostly of baseball fields and tennis courts at Halls Ferry Park, a smattering of softball fields along Army Navy Drive, and City Pool.

During Graves’ tenure, that list grew to include a skateboard park adjacent to City Pool, a disc golf course at Halls Ferry Park, and the new Sports Force complex on Fisher Ferry Road.

The tennis courts have been expanded and improved to the point that Halls Ferry Park is able to host a number of USTA state events, high school state tournaments and college tournaments each year. The facility is also in the late stages of adding pickleball courts for that growing sport.

Graves started several events and camps on his watch. A children’s summer camp is currently operating weekdays at the Jackson Street Community Center. A cornhole tournament last fall was enough of a success that a sequel is planned for this year with nearly 200 teams coming to Vicksburg. The city also sponsored a large table tennis tournament, and Graves was in charge of organizing the annual Fourth of July fireworks show downtown.

“We’ve made a lot of improvements. I think our parks and recreation are as good as anybody’s in the state,” Graves said. “We’ve been adding to our tennis courts. We’ve got pickleball courts that’ll soon be finished. We’ve put in Sports Force. We’ve put in skateboard parks. We’ve made improvements everywhere.”

Graves said the managers under him, such as tennis director Rick Shields, City Pool manager Sylvia Gurtowski, maintenance manager Rick Daughtry and assistant director Jay Harper, have made things easier by doing their jobs well. He also credited his own bosses, like current South Ward Alderman Alex Monsour — whose responsibilities include overseeing the Parks and Rec Department — for having a vision for what recreation can bring to Vicksburg.

“This job has been a blessing. I’ve had an opportunity to help a lot of people, to help the kids here in the community and offer a lot of programs,” Graves said. “We have a little bit of everything. All of my people have done a good job. I appreciate the mayor and Alex (Monsour) and all of them for bearing with me and working with me. I always tried my best to do everything they wanted me to, and to do the best we possibly could. We’ve done a great job.”

Monsour said Graves was easy to work with.

“The thing about Joe and myself, was we were always working together to bring something new to Vicksburg. We built a lot in the last four years that I served with Joe,” Monsour said. “He has contacts, he’s worked with everybody, and they’re comfortable with working with him.”

As for what’s next, Graves was unsure. He said he might return to coaching in some capacity as his 4-year-old grandson starts playing sports.

“I don’t know what I’m going to do yet. I’m going to try to take it easy and get my ducks in a row and see how things work out,” Graves said. “I may get back in (coaching) again. I’ve got a grandson who is 4 and I may start working with him and coach a little bit with him, and get him ready to play ball.”

For the future, Graves said he hopes the city continues to build on what he and others have started. An expansion and improvements to the adult softball fields at City Park and continued upgrades to the Halls Ferry Park tennis complex were at the top of things he hoped to see in the future.

On the whole, however, he said he’s exiting with the satisfaction of a job well done.

“I’ve pretty much done everything that I wanted to do. Alex Monsour has helped me, and I’ve helped him to do a lot of things here in the city. I’m hoping with this next administration with Alex and all of them, they can keep expanding on what we need to do to make it even better,” Graves said. “There’s a big future for Vicksburg. We want to change the face of Vicksburg to attract people from all over the state wanting to come here. That’s what it’s all about.”