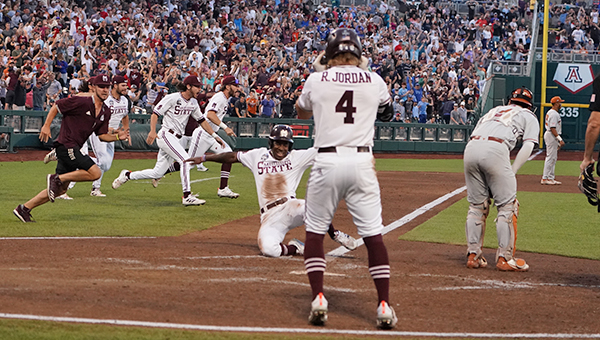 OMAHA, Neb. (AP) — Tanner Leggett’s first hit in more than a month was the biggest of the season for Mississippi State.

Leggett’s single in the bottom of the ninth inning scored the tiebreaking run, and the Bulldogs advanced to the College World Series finals with a 4-3 victory over Texas on Saturday night.

The No. 7 national seed Bulldogs (48-17) reached the finals for the first time since 2013, when they were runners-up to UCLA. Mississippi State will play for its first national title against No. 4 Vanderbilt in an all-Southeastern Conference, best-of-three series starting Monday night.

Vanderbilt (48-16) got its spot in the finals when the NCAA removed North Carolina State from the tournament because of COVID-19 protocols. Vandy and N.C. State were supposed to play a bracket final on Saturday, but that game was declared a no-contest.

Vandy won two of three against the Bulldogs in Nashville in the regular season. The Commodores are the reigning national championships, having won the CWS in 2019, and also won it all in 2014. There was no tournament last year because of the pandemic.

“We have to go against the best,” Mississippi State coach Chris Lemonis said, “and that’s the way we want it.” 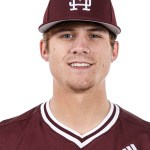 Leggett grew up in Raymond, rooted for the Bulldogs in all sports growing up, and said yes, with no hesitation, when Mississippi State recruited him out of Northwest Mississippi Community College two years ago.

Leggett has appeared in 40 games and typically is a defensive replacement in the late innings. The .206 career hitter has only gotten occasional chances to bat late in the season.

His last hit came May 22 against Alabama. In his only previous at-bat at the CWS, Tuesday against Virginia, he had an inning-ending groundout with the bases loaded.

Leggett got his opportunity in the ninth after Cole Quintanilla hit Kellum Clark with a pitch. Brayland Skinner pinch ran for Clark and stole second to set the stage for Leggett, who drove a 1-1 pitch into left-center.

Skinner came around to score easily, and Leggett rounded first base and tossed his helmet into the grass as teammates rushed to mob him.

“You black out,” Leggett said. “It’s a great feeling, knowing we’ve worked so hard to get here. Just what a moment, what a moment.”

Lemonis said assistant coach Jake Gautreau told him moments earlier that Leggett might be about to have the highlight of his career.

“Next thing you know,” Lemonis said, “the ball is in the gap.”

Texas had won three straight elimination games to force a second bracket final. The Longhorns needed to win to go to the finals for the first time since 2009. Texas has the second-most national championships of any program, with six, but has not won one since 2005.

Mississippi State started Will Bednar, who had 15 of the Bulldogs’ CWS-record 21 strikeouts in a 2-1 win over the No. 2 Longhorns (50-17) last Sunday.

Bednar was solid again, but not untouchable, striking out seven in 6 1/3 innings. Cam Williams hit a two-run homer in the second and Mike Antico doubled in a run to put Texas up 3-1 in the fifth.

The Bulldogs tied it in the sixth on Logan Tanner’s RBI double, and threatened to go ahead after loading the bases with none out. But Quintanilla (5-1) got out of the jam and allowed only one hit before Leggett’s winner.

Mississippi State closer Landon Sims (5-0) took over for Bednar with a runner on base and one out in the seventh, and ended the inning with two strikeouts. Sims retired five of the last six batters he faced.

Quintanilla said he expects Texas to be back in CWS sooner than later. It has made 37 CWS appearances — a dozen more than any other program in NCAA history — and has been there twice in the last four seasons.

For years, Kenneth Nash had heard the tales of a prized fish lurking in the waters off the South Louisiana... read more