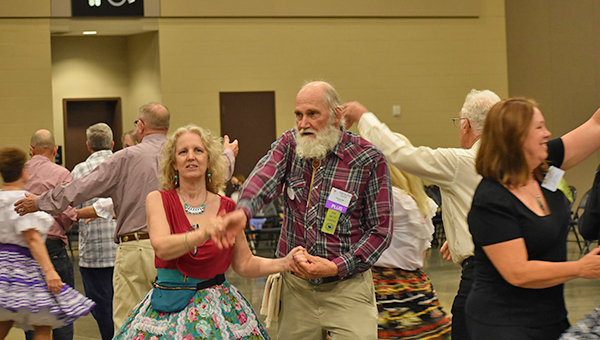 There are plenty of goings-on in this part of the world this week.

Vicksburg will host the Miss Mississippi competition, which is always a hot ticket. There are the weekly softball and baseball travel tournaments at Sports Force Parks, which in 90-degree heat and humidity is a different kind of hot ticket.

The Mississippi Braves are at Trustmark Park, finishing up a homestand, or you could stay at your home, stand around and watch Mississippi State play on TV in the College World Series.
If none of those things floats your boat, however, there is another option. One so unique and exciting I can only describe it in two words — square dancing.

The National Square Dance Convention is in Jackson this week for its 70th anniversary. It started Wednesday and finishes Saturday — sorry for the late notice — so there is still time to get in on the clogging competition if you hurry. You might even be able to participate in a square dancing flash mob somewhere in the capital city.

Now, I hate to besmirch anyone’s passions, and square dancing is obviously one for a lot of folks or else they wouldn’t have had 70 conventions celebrating it. More power to y’all. Do-si-do and Allemand right on into the night.

That said, square dancing and its variants like line dancing do not bring back particularly fond memories for me.

Way back in first grade or so, for some unknown reason, the powers that be in my New Jersey elementary school thought it wise to incorporate a square dancing unit into gym class. At an age when I thought girls were still icky, I was forced to partner up and dance with them. The worst thing, though, was how long this lasted.

We got to play the awesome game of floor hockey about three times one year. Kickball and dodgeball? Hardly ever.

We did square dancing for a month. We had gym class as a special treat on Fridays only. So for four straight weeks that magical play time was reserved for some country bumpkin calling out dance moves from a scratchy record player while pieces of my soul died a little inside.

Later on in life, line dances became one of the banes of my existence. Every time I’d get ready to cut a rug on the dance floor, here comes Brooks & Dunn’s “Boot Scootin’ Boogie” or “The Electric Slide” to kill the buzz. Twenty drunk people were somehow able to pull off perfect group choreography with no practice, while I always got a step behind by the end of the first verse and felt like an idiot.

Circle left, right on back to the table.

I did learn the fun move — at least when you’re 8 years old — of “Swing your partner round and round, swing ‘em around and throw em to the ground!” as you release your partner at maximum velocity and watch them crash in a heap. That’s not as useful in your 20s and 30s, when girls are no longer icky.

I also know what a do-si-do is. That’s something.

Not enough to ever make me go to a square dancing convention, but it’s something.

OMAHA, Neb. (AP) — Mississippi State conjured up another round of eighth-inning magic, but it was spoiled by some ninth-inning... read more