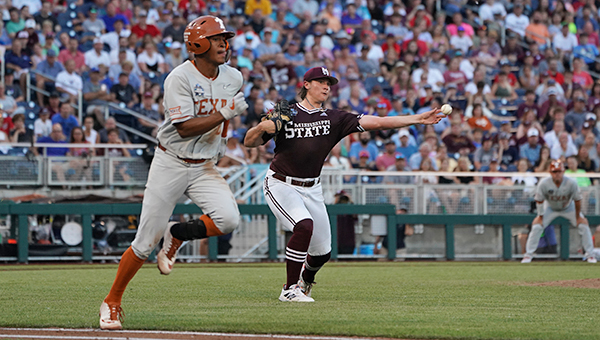 Mississippi State pitcher Houston Harding throws to first base after fielding a bunt by Texas' Trey Faltine in the fifth inning of their College World Series game on Friday. Texas beat Mississippi State 8-5 to force a rematch Saturday at 6 p.m. (Courtesy of the NCAA)

OMAHA, Neb. (AP) — Mississippi State conjured up another round of eighth-inning magic, but it was spoiled by some ninth-inning sorcery from Texas.

Ivan Melendez hit a tie-breaking three-run homer in the ninth inning, and Texas forced a second bracket final against Mississippi State with an 8-5 College World Series victory in a game that ended early Saturday after a lengthy rain delay.

The No. 2 national seed Longhorns (50-16) won their third straight elimination game and will go to the best-of-three finals next week if they can beat the Bulldogs (47-17) again Saturday night. The game will begin at 6 p.m.

“I believe that our team is playing at a very high level, not only with confidence but with their skill set right now and I don’t think we’re going to give in at all,” Texas coach David Pierce said. “The game gets back to even now and we’re going to go out and compete like we do and see what happens.”

Already in the finals is Vanderbilt. The reigning national champion Commodores automatically advanced when the NCAA announced early Saturday that North Carolina State was out of the tournament because of COVID-19 protocols.

Vanderbilt beat North Carolina State — which only had 13 players available — 3-1 on Friday. They were scheduled to play again Saturday afternoon, but that was ruled a no-contest and the Commodores got a bye into the championship series.

Mississippi State had scored three runs in the eighth to tie it 5-5 before Mike Antico drew a leadoff walk against Brandon Smith starting the ninth. Parker Stinnett came on and walked Zach Zubia before Melendez sent a 3-2 pitch deep into the left-center bleachers.

“Off the bat it felt pretty good,” Melendez said. “I knew it was a homer for sure.”

Following another walk, light rain turned heavy and the grounds crew rolled out the tarp to begin a delay lasting 2 hours, 27 minutes. The game resumed at 1:06 a.m. Mississippi State got the tying run to the plate in the bottom of the ninth, but Texas closer Aaron Nixon got the last two outs to nail down the win for his side.

Melendez’s homer was his second game-winning hit in less than 24 hours. He had the tie-breaking base hit in the eighth inning in a 6-2 victory over Virginia in a game that ended early Friday.

Melendez had entered the Virginia game 3 for his last 19 at-bats with no RBIs. The All-Big 12 designated hitter is 4-for-10 with a double, homer and five RBIs since.

Texas reliever Tanner Witt, who pitched 5 2/3 innings of shutout relief against Tennessee on Tuesday, encountered control problems after a smooth seventh against the Bulldogs.

He walked three straight to bring in one run, and after Aaron Nixon entered with the bases loaded, Brad Cumbest’s hard liner off second baseman Mitchell Daly’s glove drove in two more.

Ty Madden was sharp for a second straight start for Texas. He struck out 10 in seven innings in a 2-1 loss to Mississippi State last Sunday. In that game, Bulldogs ace Will Bednar struck out 15 and Texas fanned a CWS-record 21 times. Bednar is likely to get the ball for Saturday’s winner-take-all showdown.

This time Madden held the Bulldogs to one hit and no runs over his last five innings after MSU took a quick 2-0 lead.

The Longhorns took their first lead in the fifth on Mike Antico’s single, and they added two more runs in the seventh after MSU center fielder Rowdey Jordan lost track of Trey Faltine’s high fly to start the inning. Faldine ended up on second with a double and scored on Antico’s single, and Melendez’s base hit made it a three-run game.