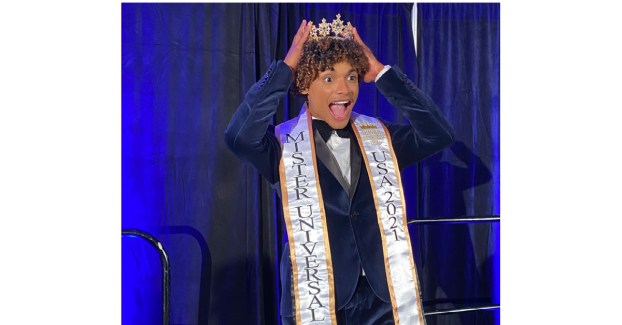 Vicksburg's Dante Sanders was crowned Mr. Universal USA. He will compete for the international title in spring 2022. (Photo submitted)

He came close when named the third runner-up to Mr. United States in 2017.

But this past June, Vicksburg native Dante Sanders finally reached a life-long dream of winning a national competition when he was crowned Mr. Universal USA in Tampa, Fla.

“It’s kind of hard to put into exact words what I felt,” Sanders said, “When they called my name out as the winner everything was a blur. They put the crown on and sash, and then I just walked and waved. It was such a blur,” he said.

Sanders, who is a member of the Saintsations, the cheerleading and dance squad that performs at New Orleans Saints football games, will go on to compete for Mr. Universal, which will be held in Colombia, South America in the spring of 2022.

The Mr. Universal Organization is an international system and has several of the same components as female pageants, including interview, swimsuit and formal wear phases of competition.

To prepare for the competition, Sanders said it took several months for him to reach his fitness goal.

“The swimsuit competition takes a lot of preparation of being in the gym and making sure all of my meals were planned out,” he said.

He also gave spent a lot of time honing in on current events for the interview phase of the competition, which he said, “holds the most weight.”

Sanders said he had the most fun pulling his wardrobe together for the competition.

“I had to be very creative because when it comes to finding that standout wardrobe in a male pageant, you just have to make sure you are being creative and are looking for pieces that capture the judge’s eye to help you stand out,” he said. “I had to put my fashion mindset to use and find things online and make sure everything was tailored.”

While being crowned has been exciting, Sanders said, being named Mr. Universal USA is not just about winning the title. It is also an opportunity to make a difference.

Sanders said he started HEAL – Honoring, Empathizing Appreciating and Loving a couple of years ago.

The mentorship-like program is geared towards youth and prior to winning the crown, Sanders said he had the opportunity to visit a couple of local schools and share with them the ideals of HEAL.

And now in winning the title, he said, he has the opportunity to expand it on a national platform.

Sanders is a graduate of St. Aloysius High School and attended East Mississippi Community College and the University of Mississippi.

Growing up in Vicksburg and being around the Miss Mississippi Competition, Sanders said he has learned a lot about what it takes to become a titleholder and it has served him well when he has competed.

“I have learned a lot about this world so I was able to prepare myself,” he said.

Dante’s hometown has also been a place that has encouraged and supported him, he said.

“Vicksburg is such a close-knit community and we all support each other and I can’t’ tell you how much support that I have had. If it wasn’t for Vicksburg raising me into who I am this would not have happened,” Sanders said, adding, “I honestly believe if I wasn’t a little boy that grew up in Vicksburg Mississippi I would not be right here where I am now as Mr. Universal USA.”

Church of the Holy Trinity window project moving along

They are among Vicksburg’s greatest treasures. The stained glass windows at the Church of the Holy Trinity are a point... read more