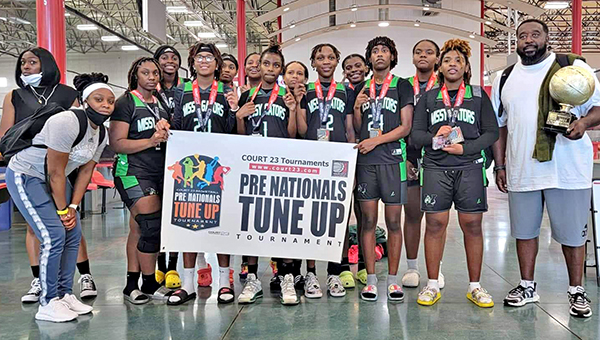 Vicksburg High's girls' basketball team poses with the trophy after winning the Pre Nationals Tune Up Tournament Sunday in Murphy, Texas. (Submitted to The Vicksburg Post)

As the highlight of its summer schedule, Vicksburg High’s girls’ basketball team went on the road to Missouri and Texas to play in a couple of tournaments.

They didn’t drive all that way to come home empty-handed, either.

The Missy Gators blitzed through a half-dozen AAU teams over the weekend, won all four of their games, and claimed the championship of the Pre Nationals Tune Up Tournament in Murphy, Texas.

The tournament title capped a summer in which the Missy Gators only lost four of the more than 30 games that they played.

“As a coaching staff, we’re extremely proud of what we’ve done this summer. I appreciate (assistant coaches Deatra Cable and Valencia McFarland) and the players for what they’ve done,” Vicksburg head coach Troy Stewart said.

The Missy Gators have gone 36-18 over the past two seasons, with a trip to the 2020 MHSAA Class 5A semifinals mixed in. With a young core of players climbing the ranks to become experienced veterans, Stewart is hopeful that the 2021-22 season is the one in which they break through and become state champions.

This summer, he said, has been designed with that in mind.

The Missy Gators have played nearly three dozen games. They finished second at a tournament in Missouri, and then went 4-0 on their trip to the Dallas suburb of Murphy.

The Missy Gators were the only pure high school team in a bracket filled with AAU all-star teams from Texas. They won their first two games by more than 40 points, the third by 12, and then gutted out a 70-69, double-overtime victory against Team Takeover in the championship game.

In the final, Layla Carter split a pair of free throws with eight-tenths of a second left in the second overtime to give Vicksburg the win.

Stewart said he’s hoping the experience of playing quality teams in a high-pressure environment pays off during the winter season.

Stewart added that there was a second reason for traveling out of state.

“This wasn’t necessarily all about going and winning a tournament,” he said. “I have ladies that I’m trying to get seen and showcased by (college) coaches in other states. There were college coaches from all over at this tournament. I’m trying to make sure (players) have the opportunity to play at the next level.”

Now that they’re back home, the Missy Gators are about to throttle back a bit. They are scheduled to finish the summer schedule with a summer league game against Jackson Prep on Tuesday night, and then will take next week off for the MHSAA-mandated “dead week” when no activities are permitted.

When they return from that, Stewart said, they’ll focus on conditioning, skills and drills until the start of preseason practice in October.

They’ll also get to reflect on a great summer.

“It says this summer has been a success,” he said of winning last weekend’s tournament.

OMAHA, Neb. (AP) — Mississippi State had the crowd. Vanderbilt had a big lead and Jack Leiter on the mound,... read more