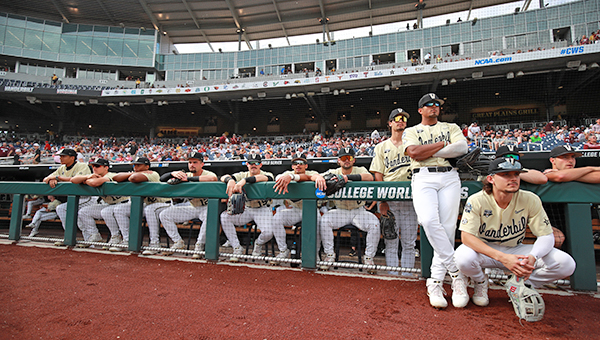 OMAHA, Neb. (AP) — Vanderbilt athletic director Candice Storey Lee and Mississippi State athletic director John Cohen on Tuesday condemned the use of racially offensive language directed at some of the parents of the Commodores players during Game 1 of the College World Series finals.

Kristyna Engdahl, communications director for the agency that operates TD Ameritrade Park, said stadium officials were aware of an interaction between fans that involved the use of racial slurs.

Engdahl said officials were talking to event staff to gather additional information, and extra securtiy measures would be put in place for Tueday’s game.

“I am deeply troubled that some of our student-athlete parents were subjected to racist slurs during last night’s game,” Storey Lee tweeted. “This is absolutely unacceptable and disgraceful behavior, and such hateful language has no place anywhere in our society. To the family members who were impacted, please know that you have my full support.”

“We join Vanderbilt in declaring such behavior unacceptable and in direct conflict with the values of both institutions and our fanbases,” Cohen said. “The College World Series serves as a celebration of the entire sport of college baseball. Highly inappropriate events must neither be tolerated nor allowed to detract from the on-the-field accomplishments of the student-athletes and their teams who have earned the right to participate on this national stage.”

STARKVILLE — Tanner Allen was already creating quite the legend for himself in the storied history of Mississippi State’s baseball... read more