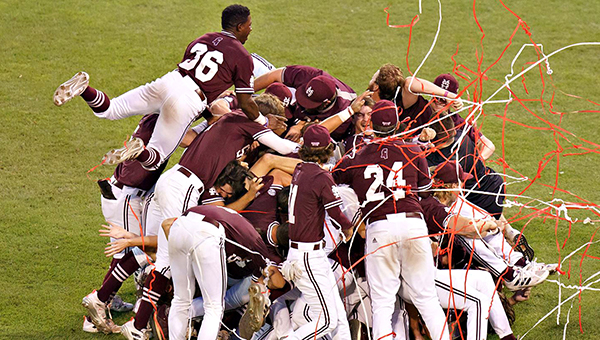 STARKVILLE — The Fourth of July won’t be the only celebration in Starkville this weekend.

Mississippi State University announced it will celebrate its 2021 college baseball national Championship on Friday, with a parade through downtown Starkville that will culminate with an event inside Dudy Noble Field.

Mississippi State beat Vanderbilt 9-0 in the College World Series championship game on Wednesday to win its first national title in any sport.

The championship parade will begin at 5:30 p.m. The route will begin at The Little Dooey on University Drive and end outside the home plate gate at Dudy Noble Field. The parade will include baseball players and coaches, athletics and campus administrators, and other invited guests and honorees.

The ceremony at Dudy Noble Field will begin approximately 45 minutes following the parade and will honor head coach Chris Lemonis and his team.

Fans are encouraged to tailgate along the parade route, and free parking will be available on campus.

To access open parking after 4:45 p.m., event traffic should:

Gates at Dudy Noble Field will open at 2:30 p.m. Admission to the event will be free and open to the public. Seating will be general admission, on a first-come, first-served basis. Fans are welcome to bring personal coolers, snacks and beverages inside the stadium. Overflow seating will be available at Humphrey Coliseum, which will open at 4 p.m..

Restrooms will be available during the event. Concession stands will not be open.

OMAHA, Neb. (AP) — Mississippi State’s first national championship had been building since 1985, when “Thunder and Lightning” — Will... read more