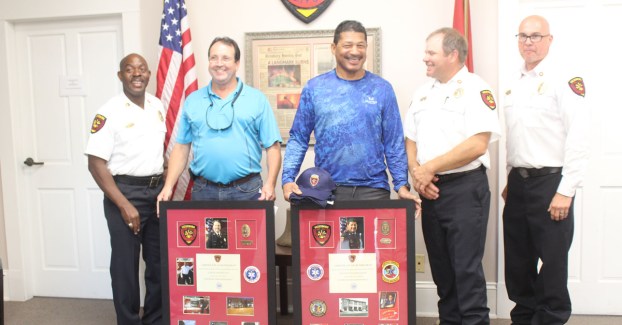 Seven Vicksburg firefighters were honored Wednesday during ceremonies at the Central Fire Station marking the promotions of five men and the retirement of two others.

“Retirement can be a good thing (for the department) because it creates opportunities for people to move up and these men (the promoted firefighters) did that,” Fire Chief Craig Danczyk said. “Our promotional exam is very intense and very competitive. These people have put themselves in a position to take advantage of the process,” he said. “I thank you for taking the test. I thank you for putting your heart and soul in it.”

Addressing the three new lieutenants, he said, “We look forward to you being in the position of lieutenant. I know you’re ready for it; all three of you have made a tremendous contribution to the fire department. I thank you for your service.”

Danczyk said lieutenants in the fire department are the second officer on the trucks and drive the trucks on calls.

“Some of our trucks are in excess of $1 million and it’s a tremendous responsibility, and they get the crews to and from the emergency scene,” he said.

“It’s been a tough year everywhere, worldwide; we’ve seen increased call volumes and our firefighter/paramedics have had to do double duty because we have the ambulance service here,” Danczyk said before putting badges on the department’s new captains, Greet and Hatchett, who were among those pulling double duty.

Captains, Danczyk said, manage the stations and the crews.

“A lot of times when we roll up on a scene they’re the ones making the tough decisions, whether it’s a medical emergency, motor vehicle wreck a fire, this is where decisions start,” he said. “It’s a tough job but it’s a rewarding job.”

He said six firefighters have been promoted to captain this year, adding, “We have a really good group.” All, he said, are veterans. “I’m excited for not only the fire department; I’m excited for the people of Vicksburg and Warren County because we have some really good people in these captain’s slots. It’s a tough job but they’re up to the challenge,” he said.

Brocato, one of the captains whose retirement opened one of those slots, retires after 26 years with the fire department. Harris leaves the department after 29 years of service. They were honored with their badges and other mementos of their service framed for display.

“Sam and I hired on together, May 10, 1995, in the group of 17. He was one of my classmates, teammates, in the fire service,” Danczyk said, adding Brocato served as a sheriff’s deputy for 7 and-a-half years in Louisiana before joining the fire department.

“Charles Harris is probably one of the most outstanding employees we’ve had here,” Danczyk said. “I think he takes pride of ownership in everything he has and everything he does.”

He recalled when Harris went under one of the department’s trucks to look for the source of a noise and found a crack in the frame that was later determined to be a defect.

“If he didn’t do that, we might have found the crack at a bad time like an emergency call and something catastrophic happened,” he said.

North Ward Alderman Michael Mayfield commended the promoted firefighters and the retirees, saying he has seen situations where the city’s firefighters have worked to save lives.

“We owe them a great deal of gratitude because of what they have done for so many years and I want you all to know that you mean a lot to the city of Vicksburg and whatever life has in store for you from now on, we pray as a city that you all would move forward with God’s speed,” he said.

Cannons, camels and fireworks will be on display this weekend. Warren County residents spending the July Fourth weekend in the... read more