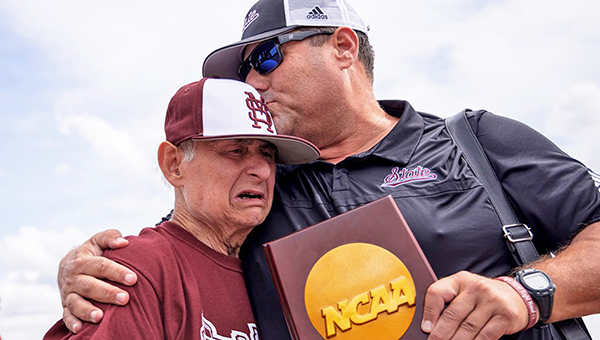 OMAHA, Neb. (AP) — It was minutes after Mississippi State was eliminated from the 2019 College World Series when Jake Mangum turned to first-year coach Chris Lemonis at the postgame news conference and made a prediction.

“You’re going to bring the first national championship to this baseball program,” Mangum said. “You are. And it’s going to be awesome. I can’t wait to see it.”

Mangum didn’t get to see it in real time — he was playing center field and batting leadoff for the Double-A Binghamton Rumble Ponies in Richmond, Virginia, on Wednesday night — but his words proved prophetic.

The Bulldogs (50-18) won their school’s first national championship in a team sport, and Lemonis and his charges took it back to Starkville in his second full season as head coach. The 2020 season ended after 16 games because of the COVID-19 pandemic.

“The @RumblePoniesBB just won a ball game! What did me and @Colegordon12 miss???” Mangum tweeted with smiley face emojis and a reference to MSU and current teammate Cole Gordon.

The Bulldogs were reeling in 2018 when Andy Cannizaro was forced out three games into his second season for what he called “poor decisions.” Assistant Gary Henderson took over, and the Bulldogs went on a surprise postseason run that ended with what would be the first of three straight appearances at the CWS.

Lemonis was hired the next month after leading Indiana to the NCAA Tournament in three of his four years. He bonded quickly with his new players and has created a laid-back yet competitive atmosphere.

“Coach Lem is unbelievable,” SEC player of the year Tanner Allen said. “He’s a player’s coach. I tell people all the time, that guy is somebody you want to play for. He knows when to be serious and he knows when to be loose. To be honest with you, when we’re loose and he’s loose, it just clicks.”

Like Mangum, who twice turned down chances to go pro to pursue a national title, Allen and fellow outfielder Rowdey Jordan decided together to come back for one more run.

“I didn’t want to do it with anybody else, let’s put it like that,” Allen said. “I didn’t just come back to make the playoffs or make a super regional, I wanted to come back to win a national championship. I believed it and we all believed it.”

The Bulldogs, like all championship teams, played their best at the end. They were, after all, swept by Arkansas and lost a series to Missouri, both at home, then went two-and-out at the SEC Tournament.

The rallied by sweeping through their regional and took a three-game super regional against Notre Dame before winning three one-run games to reach the CWS finals.

They bounced back from a devastating first inning in an 8-2 loss to Vanderbilt in the opener of the finals, dominating the Commodores with wins of 13-2 and 9-0 in Games 2 and 3.

Will Bednar, who likely will be a first-round pick in the Major League Baseball draft this month, was the CWS Most Outstanding Player after striking out 15 in his Omaha debut against Texas and pitching six no-hit innings in a combined one-hitter with Landon Sims on Wednesday night.

“Our journey is what I remember,” Lemonis said. “You remember the players. I’m sitting there today in my hotel room and I’m writing Tanner Allen’s name down and ‘Jordi’ and Will Bednar, it was hard. I got emotional in our team meeting because I’ve enjoyed coaching them so much, enjoyed being on the journey with them.”

With the draft set for 20 rounds, up from five last year but down from the traditional 40, it’s difficult to project how many MSU players will be back in 2022. Catcher Logan Tanner and shortstop Lane Forsythe both were on the CWS all-tournament team and not draft-eligible, and neither is Kellum Clark, who hit a couple big home runs.

Bednar, who led a pitching staff that combined for a Division I-record 817 strikeouts, surely won’t return, but the Bulldogs will have back their star closer in Sims.

They will also have their fans, who traveled in huge numbers to Omaha to watch the Bulldogs win it all.

“This team won’t be together on the field together,” Lemonis said. “I’m just glad they’ll finish as legends. When you go to Starkville, Mississippi, and you’re around 20 years from now, they’ll be remembered by everybody.”

Pitching was the difference in Bulldogs’ run to the title

Vanderbilt rolled through the regular and postseason on the strength of its two pitching aces. Jack Leiter and Kumar Rocker,... read more