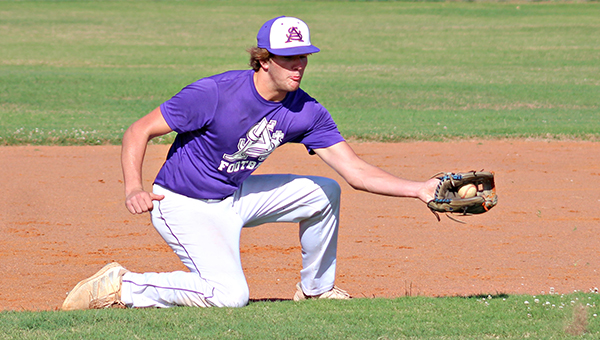 When he looks a few years down the line and starts talking about his younger players, St. Aloysius baseball coach Sid Naron can’t help but smile.

“The future is definitely bright,” he said with a grin.

The bright future, though, might still be far away. The young players are mostly in seventh- and eighth-grade and still have a lot of learning and growing to do. It’s a long-term process that is beginning this summer with what Naron calls “indoctrination,” and it’s also the primary focus of the team’s summer program.

“It’s a lot of things they didn’t know. Some terminology, some fundamental stuff, some things we’re having to change because they’ve never been taught. We’re trying to get them caught up. If we can do this now, we don’t have to worry about it in the fall,” Naron said. “It helps the new guys, too. When they show up for school in the fall it’s not a big shock factor. They’ve met some of the older guys. They have some familiar faces and friends already. We can start to develop our team chemistry a little bit early.”

The focus on younger players is understandable since they comprise the bulk of the roster. Naron said there are approximately 20 seventh- and eighth-graders, and he’s been impressed with how they’re coming along.

“It’s a very, very talented young group. It’s really opened our eyes to some of the guys, how they’ve grown physically. But not only that, the talent level in some of these younger classes is impressive. We’ve seen some growth in them playing on the weekends and having some success, and we’re excited,” Naron said. “In previous classes we’ve only had four to five seniors every year. In our younger classes right now, we’ve got 11 going into the eighth-grade class and nine in the seventh-grade class, and they’re really talented groups.”

Besides working with the younger group, the Flashes took a different approach to the summer program. They have not played any games together, opting instead to practice several times per week. With most players playing with various travel teams on the weekend, Naron said adding a handful of weekday doubleheaders wasn’t necessary.

The practices during the week allow Naron and his staff to do drill work, hammer home fundamentals, keep pitchers’ arms in shape and dial in on some of the little things that often get ignored between the end of the season in May and the start of fall practice in October.

“A lot of schools are just not playing summer ball,” Naron said. “Showcase teams and travel ball have taken over on the weekends, which is a positive thing for the exposure. We’ve got a lot of players playing off on the weekends and it’s very beneficial. We just thought, for this summer, it would benefit us to pull it in and focus on more fundamental stuff for the month of June.”

Sports column: This championship was for all of us