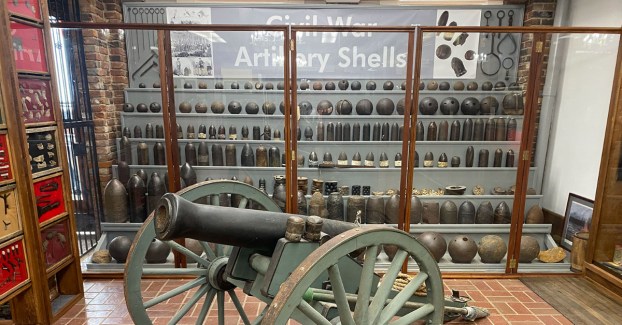 Pendleton said he knew it was important to open a museum focused on the role of African-Americans in the Civil War, because he had never seen it done before. The museum houses his personal collections, consisting of millions of Civil War artifacts.

“I think Black [people] played a big part in the Civil War, especially in Vicksburg,” Pendleton said. “I thought it would be a good thing to do.”

Since its opening, the museum has hosted visitors from all over, including several countries, and many people from Texas, Florida, Arkansas, Louisiana and California. While he has lost count of the number of people that have come to his museum, Pendleton said that is not what matters to him.

“I meet so many nice people, and I’m not so concerned about how many people come in,” Pendleton said. “My concern is that they get a good experience.”

One customer, Gina Hendrickson, visited the museum on its opening day. The four-year resident of Vicksburg said she was blown away by Pendleton’s collection and that everyone must visit the museum.

“I still can’t get over it,” Hendrickson said. “I’ve never seen anything like it.”

Hendrickson said, as a white woman who can’t understand what African-Americans went through during the war, this museum was better than any book or movie to help her comprehend what it was like.

“It really drew you in to look at what these people really went through,” Hendrickson said. “Mr. Pendleton literally collected and made something to make you learn and understand from an African-American perspective.”

Pendleton said that everyone that has visited has embraced the history and accepted it, which he hadn’t anticipated.

“The concern when you’re talking about the Civil War in the South and you raise some of the issues that we raise in here… you would think that Southerners, especially white (people), would be argumentative, but honestly I don’t get that,” Pendleton said.

This is the reaction he said he’d hoped for from customers. He said his main goal for the museum is that people learn and embrace history.

“Your opinion of history doesn’t change history,” Pendleton said. “Whether we are proud or ashamed, it still doesn’t change it. We’ve got to embrace history and either learn from it — or repeat it if it’s good.”

Hendrickson said that her biggest takeaway from the museum was that she needed to learn more about Black contributions in the Civil War and educate herself on history.

“Vicksburg is rich in history and I think Mr. and Mrs. Pendleton made it richer,” Hendrickson said. “I think Vicksburg can say we are now wealthy because of that museum. That’s how I feel about it.”