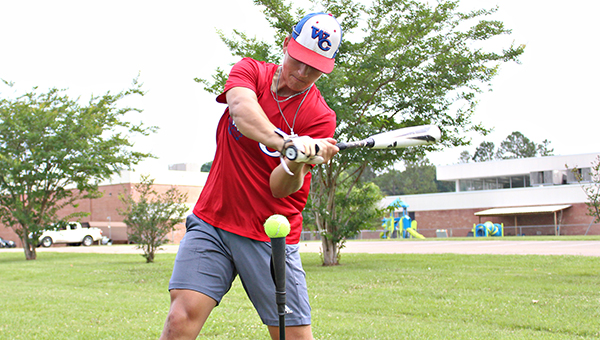 Like all good coaching staffs, Warren Central’s sat down to lay out their plan for this offseason and figure out what they needed to do differently.

The answer, as it turned out, was everything.

The Vikings have dispensed with the traditional model for high school baseball this summer in favor of a new approach. Rather than playing several games a week, they’re filling that time with practices and classroom instruction. The goal, head coach Randy Broome said, is to build fundamental skills and knowledge heading into the 2022 season, rather than rely on limited in-game reps to improve.

“Before COVID hit, we had discussed our normal summer routine. The weekend baseball has gotten to be bigger and bigger. So it’s not necessarily tapping out to them, but it made things tough on the players playing three, four, five games on the weekend and then we’re trying to cram in two or three nights of doubleheaders,” Broome said. “We weren’t doing any type of lifting during the summer. We weren’t doing any type of practicing, or skills or drills. It was just show up and play.”

Over the past couple of decades, high school teams have been fighting a battle to get the most out of their summer programs. Many top players skip the high school games in the middle of the week to play with traveling all-star teams. Others are working summer jobs, and bad weather is a constant threat. Organized practices were non-existent.

“We want to see Johnny at a different position, but over the course of a doubleheader Johnny only gets two ground balls. It started making sense that if we were going to continue to grow our players, we’re not sure if doubleheaders for two months is the way to do it,” Broome said.

So the Vikings flipped the script and borrowed a page from other sports. Rather than assemble whatever players they could for a few hours in the evening, they decided to get them all in the morning.

Warren Central’s players — including junior varsity and incoming eighth- and ninth-graders — now arrive at Viking Field at 10 a.m. Monday through Thursday for two-hour practices. There are no summer games scheduled at all. Broome said enough of his team plays on travel teams that they’re able to get game reps on the weekend and don’t necessarily need the extra games during the week.

There are approximately a dozen baseball players who also play football, and Broome said the two staffs have worked together to coordinate practices and weightlifting regimens and avoid conflicts. Warren Central’s football team practices from 7 to 9:30 a.m.

“It’s still a busy schedule, but it’s a doable schedule. Those guys that are playing, we maintain them to where they’re off for a week and then they go throw on the weekend,” Broome said. “We’re in the early phases, but eventually I think you’ll see this trending. If we do do some games, it’ll be a Vicksburg or St. Al or Clinton, somebody close, and it’ll be a controlled deal where pitchers throw 20 pitches and they’re out, just to break the monotony.”

The workouts themselves are much the same as the team would go through during the season. There is plenty of work in the batting cage, fielding and hitting drills, agility drills, video breakdowns of various mechanics, and even some old-fashioned wall ball to break the monotony.

There’s also what Broome calls “Mental Mondays,” when the team assembles in the fieldhouse to go over the mental side of the game and sports in general. Those lessons can cover everything from philosophy and motivational quotes to in-depth rules discussions and baseball analytics.

It’s a back-to-basics approach that is making up for a lot of lost time. Warren Central has not had a full offseason program since 2018. Construction at its home field wiped out most of the 2019 summer and fall plan, and COVID-19 took care of it in 2020. A reset was needed, Broome said, and this summer provided a perfect opportunity for it.

“There is some monotony to it,” Broome said. “They know we’re going to hit every day. We have the facility to do it and it’s obviously a big part of the game. Our lifting changes somewhat, but they know we’re going to lift three times a week. And then we’re trying to teach them something new once a week. Getting some of the mental stuff in right now is the focal point.”

Another benefit, Broome added, was getting the practices in early allows players and coaches to have the rest of the day off.

“Two hours a day is plenty. We can get a lot of work done,” Broome said. “They’ve got the rest of the afternoon to go to work or go be a kid, and the ones that don’t want to play on the weekends are still getting their baseball part. They’re not missing a whole lot if they’re playing or not playing.”

It’ll be a while before the Vikings see if this summer’s experiment works. After all, they won’t play another game until February 2022. So far, though, it appears to be trending in the right direction.

“It really boiled down to we’ve got to break some things down and teach mechanics and the mental side of baseball. You’ve got a summer with no limitations other than one week where you can’t do anything. We started talking around and getting some other ideas from coaches in the area,” Broome said. “Now when we get to the fall, we hopefully have a good, solid foundation to build toward the spring.”

When he looks a few years down the line and starts talking about his younger players, St. Aloysius baseball coach... read more