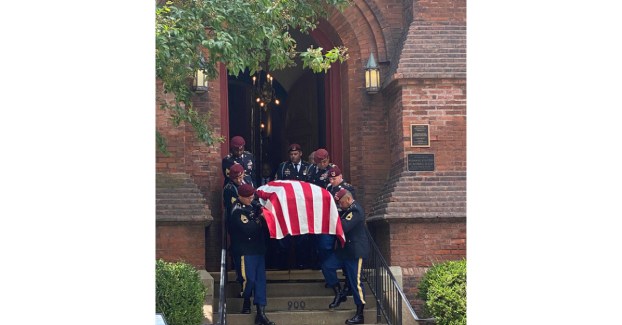 Vicksburg native Lee Davis Thames was a man of character.

Serving both God and country, he achieved the rank of Brigadier General in the United States Army and was a lifelong Episcopalian, active in his church on both the local and national level.

Thames was also a renowned lawyer who had been recognized in the Best Lawyers in America’s annual list for 31 consecutive years.

Thames died Tuesday, June 29 from complications due to pancreatic cancer. He was 84.

“He (Thames) was a wonderful person, a good churchman and was very strong in his beliefs,” former rector of the Church of the Holy Trinity the Rev. David Elliot said. “He believed very much in the church helping people who could not help themselves. He was just possessed. I think that was one of the main things I liked about him. He wanted the church to do more for people outside the church.”

Describing him as an “outgoing, confident and loving” person, Elliot said Thames had been a “good friend.”

And he was a good family man, Elliot said, laughingly adding, “He had a lot of kids, that’s for sure.”

“He was also a tremendous leader in the civil rights movement back in the 60s,” Fordice said.

At the July 5 Board of Mayor and Aldermen meeting, Mayor George Flaggs Jr. recognized Thames as a leader in the community and prior to reading a proclamation setting Tuesday as Lee Davis Thames Day.

Flaggs said, “He (Thames) was a prominent citizen of Vicksburg and a brigadier general and devoted husband and father.”

According to his obituary, written by Everett Bexley, Thames’s grandson, Thames was born on July 24, 1936, in Vicksburg, to Chancellor James and Susan Davis Thames.

As the son and grandson of attorneys, Thames knew early on that he wanted to practice law. He spent much of his youth in local courtrooms, attending often contentious trials with his father and grandfather. This exposure informed his time as a student at the University of Mississippi, where he developed an early reputation for his strong opinions. He served as the editor of the University’s annual for two years and used that position to express then-radical attitudes regarding race.

By the time Thames earned his Bachelor of Law degree in 1960, he was first in his class. He received his Juris Doctorate in 1966 and years later would be inducted into the University of Mississippi Law Alumni Hall of Fame.

In 1980, Thames left his private practice to join Butler, Snow, O’Mara, Stevens & Cannada, a then-small firm consisting of only 22 attorneys. It went on to become the largest law firm in the state. Thames quickly made partner. In 2013, the Mississippi Defense Lawyers Association bestowed him the Lifetime Achievement Award.

During his 54 years as a practicing attorney, Thames’s career was filled with more than 200 cases, some reaching as high as the United States Supreme Court.

Thames’ life in law was marked largely by his discipline, which he attributed to his perhaps equally distinguished military career.

Thames served 32 years in the active and reserve service with the United States Army, earning the Distinguished Service Medal, which is the highest non-combat medal awarded in the Army. Thames also garnered the Distinguished Member 502nd Infantry Regiment recognition and was the first reservist selected for the NATO Senior Staff Officer’s course and Air Assault and Special Warfare courses. He eventually achieved the rank of Brigadier General.

As a lifelong Episcopalian, Thames earned a Theology Certificate from the University of the South in Sewanee, Tenn. in 1984, and was also a Visiting Scholar at the Episcopal Divinity School in Cambridge, Mass. He served as chair on several committees within the Diocese of Mississippi, including the Committee on Peace and Justice and the Search and Nominating Committee for the selection of the tenth Bishop of Mississippi. He also served seven times as a Deputy to the National Convention and was legal counsel to the House of Bishop’s Disciplinary Tribunal.

A major convenience store company with stores in multiple states is planning to build a store and fueling station capable... read more