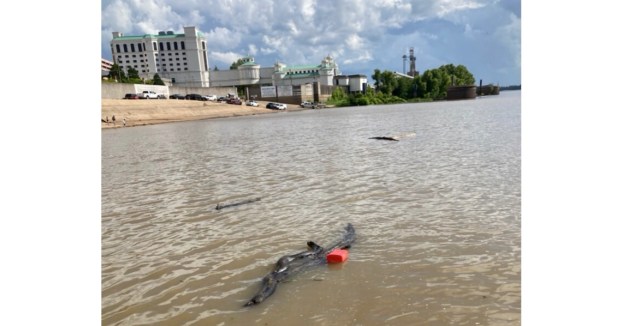 This log in the Yazoo Diversion Canal sparked a concerned 911 call for a capsized boat on Friday. However, according to authorities, there was no overturned boat and no one was in danger. (Photo submitted)

Warren County authorities took to the water Friday afternoon after receiving a 911 call from a person standing on Washington Street who reported seeing what they thought was an overturned boat floating in the Yazoo Diversion Canal with a person hanging onto it.

The search included a boat for a U.S. Army Corps of Engineers contractor, Warren County Sheriff’s Office boats and a boat from Ergon Marine.

Warren County Sheriff Martin Pace said the overturned boat was later determined to be a 12-foot log with an orange jug attached to it.

At the time, however, authorities were responding to what they believed was a serious emergency.

Pace said he arrived at the city’s Riverfront ahead of sheriff’s deputies and the sheriff’s office’s boats and found a boat operated by Chustz Survey, a contractor for the Corps. He said the boat’s pilot, Cory Lee, agreed to take him on a search of the river.

“We first went north to the mouth of the harbor,” Pace said. “We saw the log, but at the time, we didn’t associate it with the call.”

When the search of the harbor area was unsuccessful, he said, he and Lee, accompanied by the sheriff’s office boats, went south past the Old U.S. 80 and Interstate 20 bridges. When that search revealed nothing, they returned to the log.

“When we got to the log, I contacted the caller and showed them the log and they verified that was what they saw,” Pace said.

Vicksburg native Lee Davis Thames was a man of character. Serving both God and country, he achieved the rank of... read more