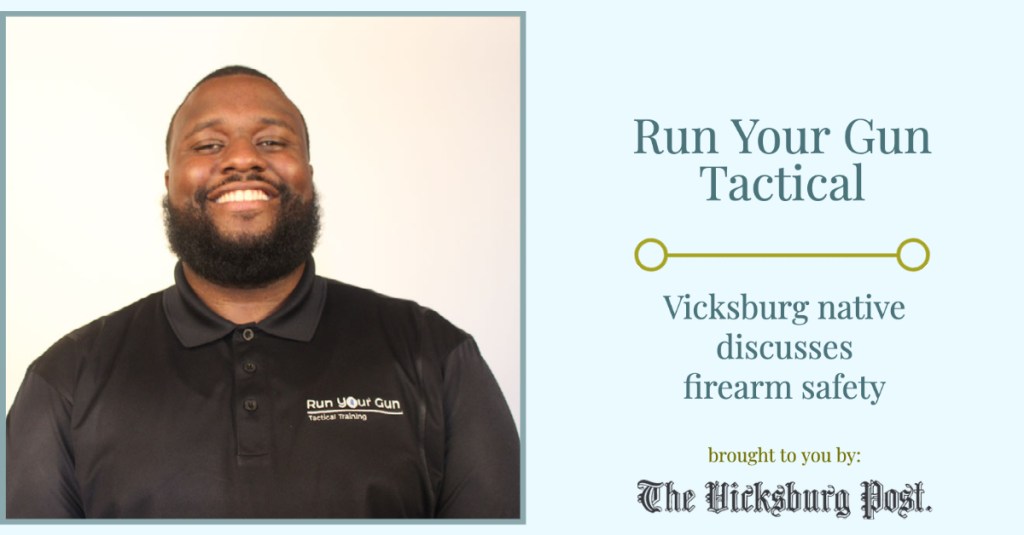 Eleven juveniles have either been charged in or been the victims of gun crimes in Vicksburg since January 2021, including the two reported homicides in the city this year, which were allegedly carried out by 14- and 15-year olds.

One Vicksburg native is taking a pro-gun safety approach to combatting gun violence, especially among the city’s youth. Lack of gun safety training, he said, is a major contributor to gun violence.

Jaron Smith, owner of Run Your Gun Tactical Training in Brandon, is a self-proclaimed gun enthusiast and certified firearm instructor through the National Rifle Association. In addition to his NRA certification, Smith also recently became a certified Chief Range Safety Officer. Run Your Gun Tactical is also a licensed gun manufacturer, and Smith builds and sells AR-15s from his shop.

In Smith’s opinion, one of the biggest aspects when it comes to gun violence — especially among juveniles — is a lack of education about firearms and firearm safety practices.

“You don’t touch firearms without preaching safety first and setting ground rules that you can take beyond any course or training to any situation that takes place,” he said. “First things first, always think of firearms as tools. Any time you use a tool correctly, there’s a consequence that comes with that. So, if I use a hammer to do anything other than hammer a nail, I risk harming myself or damaging property of some sort.”

Having trained individuals from ages 5 to 71 in firearm safety, Smith said situational awareness is one of the first ground rules he sets in place. Describing it as a “controlled paranoia,” he explained that a key to avoiding gun violence or escaping a dangerous situation is to be aware of where the exits are, and aware of potential exits if primary exits are blocked.

Another aspect of Smith’s firearm safety courses is self-defense and accepting responsibility for consequences.

“The biggest thing I tell any person that comes across my course is that it’s a great thing that you have a firearm to protect yourself,” he said. “But please note, even when you’re doing a good thing as far as defense, anything that happens beyond your defense, you are responsible for it. You will have to answer for that.”

Bystander intervention is not an aspect of Smith’s courses, he said, and for good reason: bystanders are not meant to be the hero.

“When I was in school, whenever you’d see someone fighting, you’d always see people run to the fight,” he said. “First things first, once you realize what’s going on, get out of there and run from the situation.

“I tell everybody in my courses, ‘You’re coming here to obtain an enhanced carry permit, you’re here to learn more about firearms. You are not the police. You are not to be the hero.'”

Protecting oneself with a firearm is a right and a privilege, he said, when someone is acting aggressively toward you and your life is in danger.

The other half of bystander education is being knowledgeable about firearms — even if you don’t own a gun yourself.

“There’s a phrase that’s been around for so long, that guns kill people,” he said. “It’s not that guns are killing people… it’s the people who need education about the firearms.”

Those who do own firearms, or are considering buying a firearm, must be trained in the proper handling of weapons and as comfortable handling a gun as they would be a hammer, screwdriver or kitchen utensil, Smith said.

Vicksburg has a higher number of drive-by shootings and shots fired reports than it does reports of gunshot wounds or deaths — something Smith again attributed to lack of firearms training.

“A lot of people on the negative side (of gun possession) are bad shots,” he said. “Well, the goal for the citizen who does everything right is to be a good shot. Get training with your firearm. Even if you don’t know what firearm you want, I have a rental program where you can rent a firearm and I can train you. We can find what is fitting for you, no matter the race, sex, age.”

A father of three boys, Smith said even his children have a basic understanding of firearms and the damage that could be caused when they’re in the hands of an untrained individual.

He described firearms training as a means to combat gun violence as the “elephant in the room that’s never discussed.”

“Training is what’s going to alleviate some of this (gun violence due to negligence), and also just overall support from the community to put on different events or seminars or rallies of some sort (to get people talking about fighting gun violence),” Smith said.

BUYING A FIREARM FROM RUN YOUR GUN TACTICAL

Run Your Gun Tactical holds a Federal Firearms License, which allows the company to legally manufacture and sell firearms to the public. To purchase a firearm from Run Your Gun Tactical, Smith said there is a specific set of guidelines to follow. First, the purchaser’s name must be entered into the FBI National Instant Criminal Background Check System (NICS).

If the purchaser holds a valid enhanced or concealed carry permit, that can take the place of a background check.

“If you don’t have (a permit) and the FBI check comes back declined, you will not purchase a firearm from Run Your Gun Tactical,” Smith said. “We don’t operate like that, to prevent (gun crime) situations from happening.”

Above all else, Smith said, respect for firearms — and others, for that matter — begins with instilling good character and establishing positive role models. Smith is a graduate of Vicksburg High School and attended Jackson State University before becoming an IT Specialist for a Mississippi-based restaurant chain. Although he lives in Brandon now, his family still lives in Vicksburg.

If there are youth in the Vicksburg area who need support, Smith said his door is always open to help others.

“If you don’t have any person in your home you can talk to, if you’re not comfortable going to the police, they can definitely reach out to me,” he said. “I’m on Facebook and Instagram and my contact information is on those pages. I’m part of a network of instructors as well, so we can find a way to help as best as possible.

To take his mission of community outreach a step further, Smith said Run Your Gun Tactical Training is seeking opportunities to host community training events and seminars in Vicksburg. Those interested in learning more can visit his website, www.runyourguntt.com.