Vikings changing focus as next phase of offseason program begins 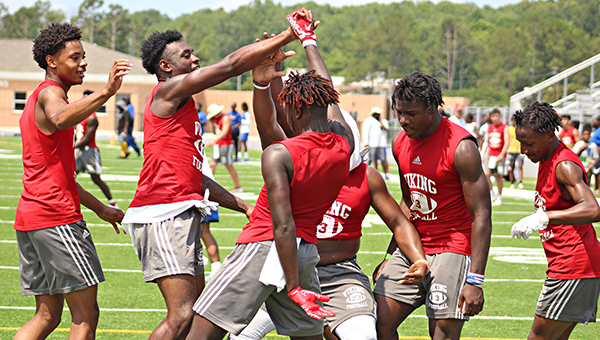 Warren Central is at halftime of its offseason.

The Vikings spent June getting in shape and hosting a series of 7-on-7 games. They took this week off as an MHSAA-mandated “dead week” for all sports, and head coach Josh Morgan said there will be a far different focus and energy when they return on Monday.

“When we get into July, and back from that dead week of July 4, we’re going to start getting into getting ready for the fall. It’s more intense and dynamic in the way we’re going to approach it. We’re going to get into the fall camp mentality,” Morgan said. “Come July it’s really gearing in and putting your guys in the right place. It’s repetition and getting ready to play in August. It’s a different animal.”

Warren Central finished 7-3 last season and reached the second round of the MHSAA Class 6A playoffs for the fourth time in six seasons. The 2021 season, however, will bring a lot of change.

Warren Central is shifting to the South half of Class 6A, with a number of region opponents it hasn’t seen in recent memory and even a new style of football. The Vikings’ old region was more run-oriented, while the teams it’ll see this year in Region 3-6A throw a bit more.

With that in mind, Morgan said the work in June was helpful. Warren Central hosted Jefferson County, Raymond, Yazoo County and Natchez in a series of 7-on-7 scrimmages over three weeks in June.

“The more you see it, the better you get at it,” Morgan said. “When you get to see teams that are five-wide, you have to cover the whole field, the quarterback can really throw it to receivers that can go catch it, it’s a different dynamic and if you don’t see it often it catches you behind the 8-ball. It’s good to get out in front of that stuff.”

The 7-on-7 scrimmages concluded at the end of June, and the July schedule will be more traditional as the Vikings prepare for the start of the season. They’ll have about three weeks before they can put on full pads in early August, and just over a month until North Pike comes to town for a preseason scrimmage.

The season opener is Aug. 27 against Germantown, in the Red Carpet Bowl at Vicksburg High.

Morgan said he likes what he’s seen so far during the offseason, from the quality of work his players have put in to the energy they showed on the sidelines during the 7-on-7 games.

“I’m excited about this team. I think we’ve done a good job with what’s in front of us, whether it’s the offseason or the spring and going into summer,” Morgan said. “We’ve done everything the right way up to this point, and it’s important that we keep pressing it and pin our ears back and get ready to attack this last month.”

He’s also excited about a large senior class — nearly 30 players — that are providing leadership and experience. There will be eight new starters on defense, and the senior leadership at other positions could help ease that transition.

“Our guys are doing good. Everybody’s committed. At this point, once you’ve had the offseason and spring, we have our guys and our team in place,” Morgan said. “We have a big senior class and good leadership, and everybody is committed to what’s necessary. That’s good to see. There’s no substitute for hard work, and they’re doing all of the things to get better.”