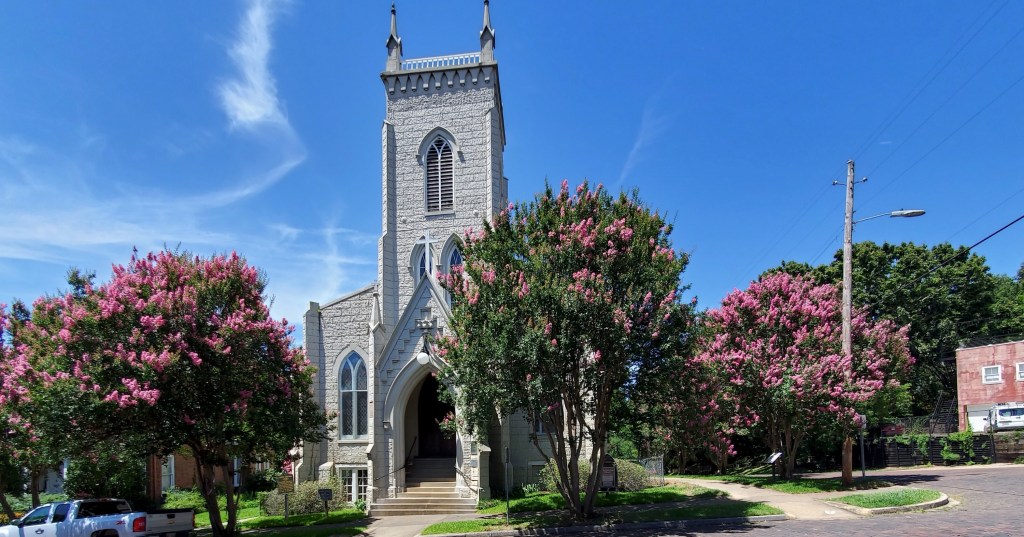 Sitting on a quiet spot at the corner of Main and Locust streets, Christ Episcopal Church looks pretty much the same as it may have looked in 1863 after the surrender of Vicksburg by Gen. John C. Pemberton to Union Gen. Ulysses S. Grant.

Like many buildings in the city, it sustained damage from Grant’s artillery and Adm. David Dixon Porter’s gunboats on the Mississippi River.

During the Siege, its rector at the time, the Rev. Dr. W.W. Lord, held daily services.

But more than five months after the city’s surrender to the Union Army, Christ Episcopal was the scene of a protest by four women (five, by one account) whose objection to a Union order that violated the Constitution’s provisions on separation of church and state resulted in their being banned from the city for the remainder of the Civil War.

The incident involved an order requiring churches in the areas occupied by Union troops to say a “Prayer for all those in Civil Authority,” which according to local accounts of the incident is called the “prayer for the president.”

Christ Episcopal historian George Downing said Episcopalians in America have a custom of saying a prayer for the president of the United States, and the prayer is in the American Episcopal Book of Prayer.

When the South seceded from the Union in 1861, the Episcopal bishop of Louisiana changed the wording of the prayer to “pray for the president of the Confederate States of America,” Jefferson Davis, he said.

Vicksburg was under Union control. Maj. Gen. James B. McPherson, one of Grant’s commanders during the siege, commands the Department of Vicksburg, and the order for the “Prayer for all those in Civil Authority” is in effect.

“McPherson was left in charge of Vicksburg,” Downing said. “He and some of his officers attended Christ Church for the Christmas service.”

By that time, Lord and his family had left Vicksburg and moved east to South Carolina, and the church did not have a full-time rector.

According to one account, a retired Episcopal minister named James Angel Fox, also called “Parson Fox,” a Connecticut native and former pastor who was a Union supporter, gave the prayer for civil authority after a crisis of conscience.

However, Downing said church records indicate Fred Boyd, an elderly retired minister and former rector, who was the church’s “priest-in-charge,” a minister filling in when a church did not have a rector, said the prayer.

“During that service, it came time to read the prayer for the president of the confederacy, and the Union officers were in attendance, no Confederate soldiers were in attendance, and the retired elderly priest decided the safest thing was to shift back and say a prayer for the president of the United States (Abraham Lincoln),” he said.

The prayer offended the women sitting in the congregation. They stood up and — “with a swishing flurry of long skirts and an angry tapping of small feet,” according to one written account — walked out of the church, offending McPherson, who believed the women’s actions were an insult to the U.S. That afternoon, each woman received a visit from the Union Provost Marshal’s Office, was arrested and expelled from Vicksburg.

According to an account in the book “Reconstruction in Mississippi,” by James W. Garner, the women were put on a train and sent across the Confederate lines, where they stayed until the end of the war.

Their action resulted in a subsequent order by McPherson to fine, banish or imprison anyone who insulted or showed disrespect to the president of the United States, the flag, or Union officer or soldier.

Boyd may have debated whether to say anything at all, Downing said, “But if you’re standing up in the face of Union officers, I would say the tendency would be to conform.”

The incident at Christ Episcopal wasn’t the only conflict involving the “Prayer for all those in Civil Authority,” which was rescinded in July 1865.

According to an article, “Civil War, Church, and State” on the Living Church Website, Richard Hooker Wilmer, the Episcopal Bishop of Alabama, directed his clergy in a pastoral letter to omit the “Prayer for all those in Civil Authority.” He was later suspended by the military government, forbidden to preach or hold services, and all the Episcopal churches in Alabama were shut down and secured. The order was lifted after President Andrew Johnson intervened, and three days later, Wilmer directed his clergy to use the prayer.

Closer to Vicksburg, the Rev. William Henry Elder, Catholic bishop of Natchez, refused to pray for the Union government and was expelled from the city by Union officials. He was imprisoned in Vidalia, La.