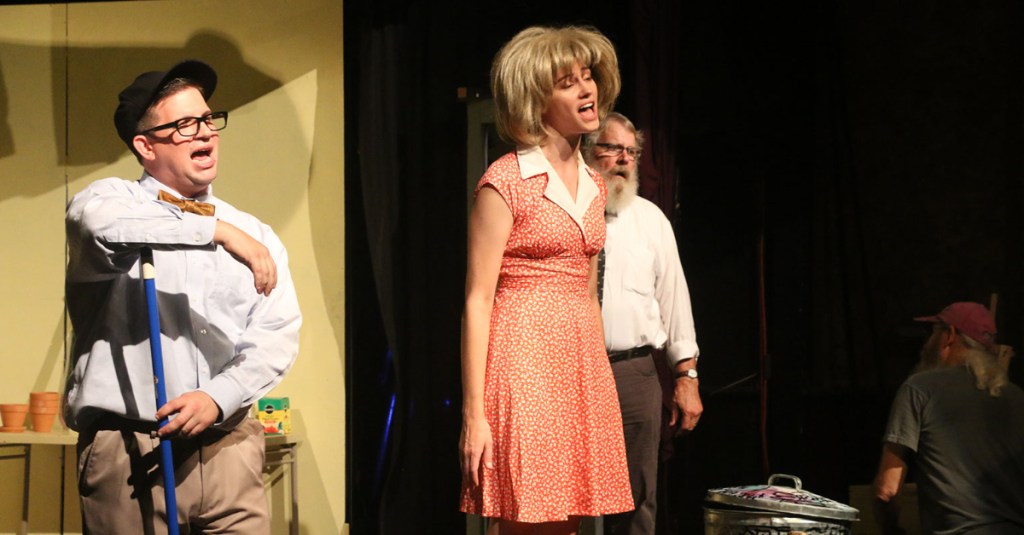 Something is growing at the Stand Theatre, and it’s not just the excitement over actors returning to the stage.

The West Side Theatre Foundation is set to perform Howard Ashman and Alan Menken’s “Little Shop of Horrors,” a musical spoof about a forlorn florist shop worker, Seymour, played by Brian Sessums, who raises a plant that grows and flourishes when it’s fed human flesh and blood.

“The musical was inspired by a cheesy horror film of the same name directed by Roger Corman in 1960,” WTF film programmer Daniel Boone said. “A film of the musical was made in 1986 starring Rick Moranis, Ellen Green and Steve Martin.”

Boone said the musical had been set to open at the Strand in 2020, but two weeks before opening night, the pandemic shut everything down.

“Zoom rehearsals were attempted with very little success, so everything was put on hold,” Boone said.

Also, later in 2020, Boone said the building that houses the Strand was sold, which had introduced “new layers of uncertainty to the future of the show and the company itself.”

But the local cast was determined.

“They just wouldn’t let it go,” the director of the show Jack Burns said.

After an agreement was reached in the spring with the new owners and the entire cast was vaccinated against COVID-19, production resumed.

“Sessums, who has performed in more than 45 stage productions between the WTF and the Vicksburg Theatre Guild, said he had seen “Little Shop of Horrors,” and when he heard the WTF was holding auditions, he thought it would be a fun show in which to participate.

As the male lead in the production, Sessums said, his character, which is a bit on the nerdy side, is reflective of his own demeanor.

“I figured this character would be easy because it’s just me being me,” he said.

Sessums said his favorite scene in the production is his duet, “Suddenly Seymour” with Alex Long, who plays Audrey, an attractive yet ditzy coworker at the florist.

“This is definitely the high point of the show,” fellow actor Mark Jourdan said.

Jourdan, who is also a seasoned performer in both WTF and VTG productions, plays Mr. Mushnik, the floral shop owner.

In addition to Sessums, Jourdan and Long, the cast includes Patrick Wallace as Orin Scrivello, Reba Causey as Ronnette, Jai Dobbs as Chiffon, Renee Irons as Crystal and Daniel Boone as the voice of Audrey II — the plant.

Boone said Burns has been instrumental in all design phases of the production and audience members are in for a treat.

“Jack has an energy, passion and enthusiasm for the theater in general, but also this show,” Irons said, which is why she said she decided to audition for the musical.

After its long-awaited performance, the WTF’s “Little Shop of Horrors” is only days away from opening and the cast is certain that the public is looking forward to not only the enjoyment of returning to a live production at the Strand, but also a performance that includes 1960s style doo-wop tunes and the tale of a guy and his man-eating plant.

“I think people are going to be ecstatic. I think everyone is so ready for it,” Irons said.

“I’ve had a lot of people tell me they cannot wait to come see the show,” Long said.