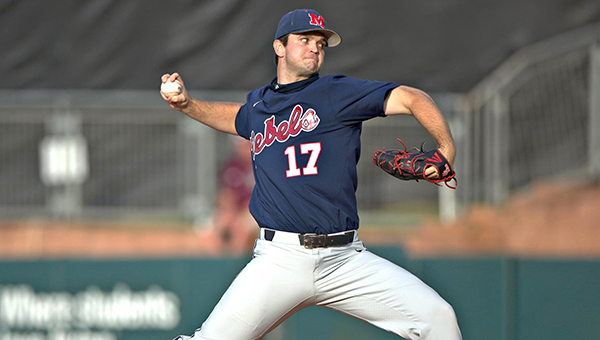 The Toronto Blue Jays are hoping Gunnar Hoglund’s future is bright enough to make it worth waiting on him for a bit.

The Ole Miss right-hander, who had Tommy John surgery this spring, was selected by the Blue Jays in the first round of the 2021 Major League Baseball draft on Sunday.

Hoglund was one of Ole Miss’ top pitchers before his injury in early May. He was ranked as the No. 22 prospect in the draft by MLB Pipeline, and was taken with the 19th overall pick by the Blue Jays.

“We’re really excited about how it shook out for us, knowing some of the different strengths of the draft and especially how it relates to Gunnar,” said Shane Farrell, the Blue Jays’ director of amateur scouting. “His trajectory along the year, he was pitching his way into a top-10 pick. Unfortunately, the injury kind of derailed that. We were extremely fortunate for him to be there when we selected today.”

Hoglund was picked 36th overall by the Pittsburgh Pirates in the 2018 MLB draft, but did not sign with them. He instead went to Ole Miss and posted a 10-5 record in 31 starts over the past three seasons. He had 186 strikeouts and only 35 walks in 154 innings pitched.

Hoglund had elbow surgery on May 18, and his recovery is likely to stretch into 2022. Farrell said Hoglund’s upside was high enough that the injury did not scare the Blue Jays from making the pick.

“He’s a strong, physical kid with above-average control and command of his fastball and an above-average slider as well,” Farrell said. “The change-up is a pitch that was good for him in high school, and we saw a little bit less of it at the college level, but I’m sure that will develop more as a pro. We saw a tick up in fastball velocity this year, combining that with an upper-level ability to command the ball on both sides of the plate and command the slider off the fastball. That’s what really drove us to make this selection.”

Farrell added that the Blue Jays’ familiarity with Hoglund gave them some extra confidence in selecting him. Hoglund grew up near Toronto’s Player Development Complex in Dunedin, Florida, and the team has scouted and built a relationship with him over the years.

Hoglund and his family visited the Blue Jays’ complex leading up to the draft as well, Farrell said.

“The path that a pitcher is about to go down coming back from such an injury is lonely at times and there are a lot of unknowns,” Farrell said. “So trying to build that comfort for him and his family for the first day that he walks in through the door at the PDC, I think is something that was really important to us so he knew who he would be working with and what our organization is about and our values.”

Day 2 of the MLB draft, which will span rounds 2-10, begins at noon on Monday. The draft will conclude with rounds 11-20 on Tuesday, starting at 11 a.m. MLB Network and MLB.com will air live coverage of all of the picks.

A couple of weeks after he carried Mississippi State to its first national championship, Will Bednar got another big prize.... read more