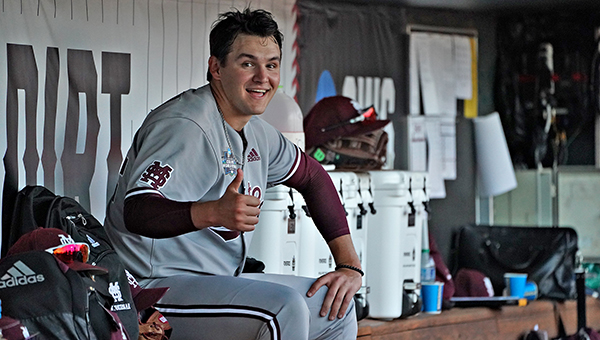 Mississippi State pitcher Will Bednar gives a thumbs up during a College World Series game against Texas. Bednar, who led Mississippi State to its first national championship, was selected 14th overall by the San Francisco Giants in the 2021 Major League Baseball draft on Sunday. (Courtesy of the NCAA)

A couple of weeks after he carried Mississippi State to its first national championship, Will Bednar got another big prize.

Bednar, a sophomore pitcher, was selected by the San Francisco Giants with the 14th overall pick in the 2021 Major League Baseball draft on Sunday. The right-hander was projected as a late first-round pick as late as May, but moved up the draft board while earning the Most Outstanding Player award at the College World Series.

“I think what we really liked about Will was just kind of what he showed at the College World Series,” said Michael Holmes, the Giants’ director of amateur scouting. “He’s a physical, college right-hander with a fastball that misses bats in the zone, and he has the ability to miss bats with his secondary stuff. I think anyone that got a glimpse of him in Omaha saw the type of competitor that he is. He checked a lot of boxes for us as a starting pitcher, and we were really excited to be able to select him.”

Bednar finished sixth on MSU’s single-season strikeout list with 139 over 19 appearances, which included 16 starts. In 92 1/3 innings, he had a WHIP of 1.06 and limited hitters to a .214 batting average against. He was a part of four combined shutouts and ended the season with a 9-1 record.

He saved his best stuff for the end, however.

Bednar started three games in the College World Series and allowed three runs on five hits over 18 1/3 innings. He had 26 strikeouts — including a school-record 15 in the CWS opener against Texas — and only six walks.

In the national championship game against Vanderbilt, Bednar pitched six innings of no-hit ball to lead the Bulldogs to a 9-0 victory.

Bednar was rated as the No. 32 prospect in the draft by MLB Pipeline, but his performance in the College World Series certainly helped him move up to the middle of the first round. The slot value for the 14th pick is $4,036,800.

“Not really. I was kind of locked in with us winning the national championship, just doing whatever I could to help the team,” Bednar told MLB Network when asked about his rising status during the CWS.

Bednar’s older brother, David, plays for the Pittsburgh Pirates and is currently in his third major league season. The Bednar family lives just north of Pittsburgh, so the two brothers got to share the moment with each other late Sunday night after David returned home for MLB’s all-star break.

“They actually just finished up their series against the Mets today, so he actually just got home like five minutes after the pick,” Will Bednar said. “It was really cool to meet him in the front yard and have him get home that soon.”

Day 2 of the MLB draft, which will span rounds 2-10, begins at noon on Monday. The draft will conclude with rounds 11-20 on Tuesday, starting at 11 a.m. MLB Network and MLB.com will air live coverage of all of the picks.