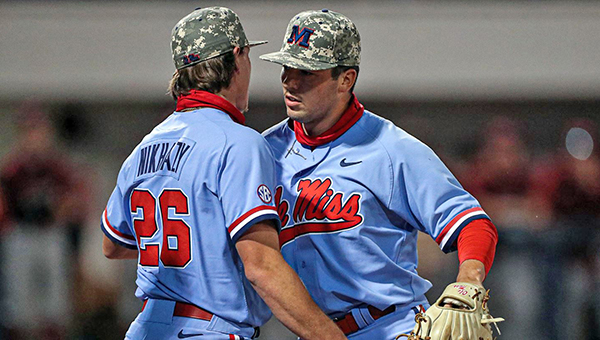 Major League Baseball teams continued to make Mississippi fertile ground for its next crop of players on Monday.

Seven players from the state’s college programs were selected on Day 2 of the 2021 MLB draft, after two were picked in the first round Sunday night.

The second day of the draft included Rounds 2-10. The draft concludes Tuesday with Rounds 10-20.
Nikhazy and Broadway joined fellow Ole Miss pitcher Gunnar Hoglund as early-round draft picks. After Hoglund was picked by the Toronto Blue Jays in the first round on Sunday night, Nikhazy went to Cleveland in the second round and Broadway to the White Sox in the sixth on Monday.

It’s the first time Ole Miss has had two players picked in the first two rounds since 2008.

Nikhazy was voted a unanimous All-American at the conclusion of his junior season, with first-team selections from ABCA/Rawlings, Baseball America, Collegiate Baseball, NCBWA and D1Baseball. He finished with an Ole Miss single-season record 12 wins and 142 strikeouts.

Broadway earned All-America honors from Baseball America and NCBWA as he finished with a 4-3 record and a 3.44 ERA, in addition to his 16 saves he posted a 2.51 ERA over his 29 relief appearances. Broadway ranked second in the country in saves, one behind Georgia Southern closer Nick Jones.

Southern Miss’ Trimble was also a second-round pick, taken by the Baltimore Orioles at No. 65 overall in Competitive Balance Round B. It’s the third time in the last four years that a Southern Miss player has been picked in the first two rounds.

The switch-hitting outfielder was a first-team All-Conference USA selection in 2021, as he tied for the team lead in batting average at .345, and led the Golden Eagles with 17 home runs, 72 RBIs and 12 stolen bases. His RBI total tied for first in NCAA Division I.

Och, meanwhile, was picked by the San Diego Padres in the seventh round, No. 220 overall. He appeared in 21 games for USM this season and posted an 8-0 record with a 1.27 ERA to go along with two saves. He had 59 strikeouts and walked 12 batters in 35 1/3 innings.

Allen, the Southeastern Conference Player of the Year, went to the Miami Marlins with the 118th overall pick in the fourth round, before Cerantola (No. 139) and MacLeod (No. 159) went to Kansas City and Minneapolis, respectively, in the fifth round.

Allen led the SEC in batting average (.383), hits (100) and RBIs (66), and reached base safely in 64 of the Bulldogs’ 67 games. He was one of four Division I players to produce 100 hits and just the seventh from Mississippi State ever to reach the mark.

Cerantola was drafted for the third time in two different sports. Tampa Bay picked the Canada native in the 30th round in the 2018 MLB draft, and he was also selected in the 2016 Ontario Hockey League draft by the Owen Sound Attack.

MacLeod was one of Mississippi State’s weekend starters. He struggled in two College World Series starts, but still finished 6-6 with a 5.23 ERA and 113 strikeouts in 82 2/3 innings. The Bulldogs won 13 of his 19 starts.

The Toronto Blue Jays are hoping Gunnar Hoglund’s future is bright enough to make it worth waiting on him for... read more