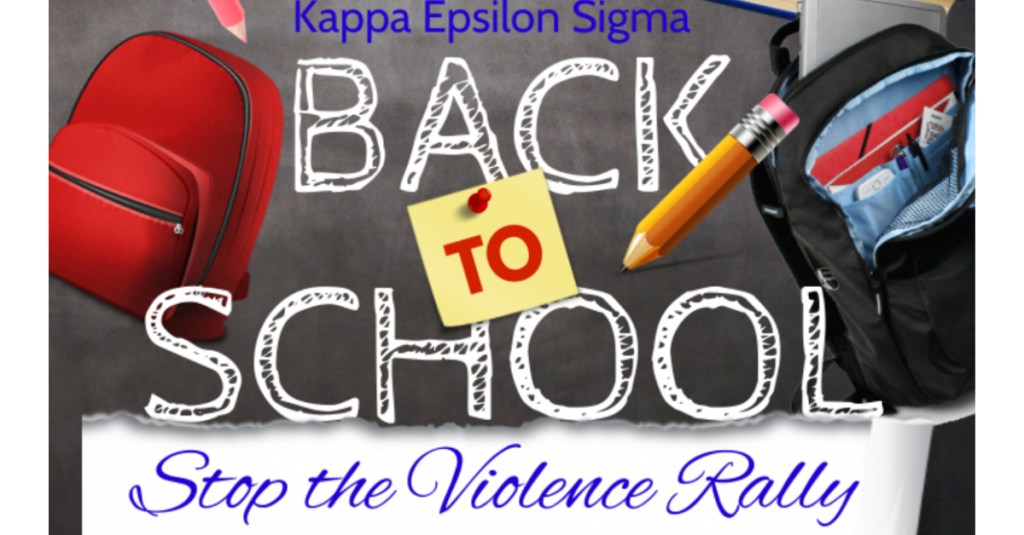 Brothers of Kappa Epsilon Sigma, Phi Beta Sigma Fraternity, Inc. is hosting its Back-to-School Stop-the-Violence Rally on July 30 from 5 to 8 p.m. at the Vicksburg City Pavilion.

The event will consist of speakers, food, games and a school supply hand-out. Law enforcement will also be there to speak and educate the youth about gun violence and to make connections with the community.

“I think once we get our youth out to realize that our police officers are here to help us by means of solving our conflicts without guns, it will help our community as a whole and help reduce the crime rate,” co-chairperson of the event, William Durr, said.

Part of the event will involve teaching scenarios for the kids to learn what to do in situations of disagreement and how to work it out without violence. Co-Chairperson of the event Victor Tyrone Jr. said these scenarios will make children think critically about situations so they know what to do when they find themselves in a bad position.

Tyrone, who is also a teacher and coach at Warren Central High School, said many of the children in his classroom watched him when they grew up because he was a friend or teammate of their uncle or family member. As a result of this, he said they know a lot of what he personally went through — including the death of his classmate 12 years ago due to gun violence.

“They’re getting to an age where they are going to be faced with the same situations, and somebody has to teach that if you can’t talk it out, there’s other ways to handle disagreements and fights,” Tyrone said.

As a teacher, Tyrone said he has also seen what a lack of school supplies can do to a child in the classroom. He said some children come into school defeated because they don’t have the supplies their classmate does. Tyrone said some families just don’t have the resources in the midst of a pandemic to provide new school supplies to all the children in their household. This event is trying to solve that problem.

“As a community, we have to stick together and uplift each other and help each other in every way possible,” Tyrone said. “I think that a lot of the times, when kids come in the classroom, if they feel prepared, they feel better.”

The Brothers will be accepting any and all donations for the school supply drive. Donations can be brought to the event or people can contact Tyrone at 601-218-6788 or Durr at 601-630-6118 to arrange to collect the supplies beforehand. Students can pick up supplies at the event, and, if any are leftover, The Brothers are planning to disperse the supplies among the schools in Vicksburg Warren School District. Any student in the community in Kindergarten through 12th grade is able to get supplies.

“If you don’t have something, don’t be afraid to go into the community and ask for help,” Tyrone said. “Everybody needs help. If someone tells you they don’t need help, they’re lying.”

The Brothers are hoping to make it an annual event and be able to give back and educate the youth of the community each year.

“We’re anxious to have this and give back to the community,” Tyrone said. “We want to have a hand in trying to make the community change for the better.”