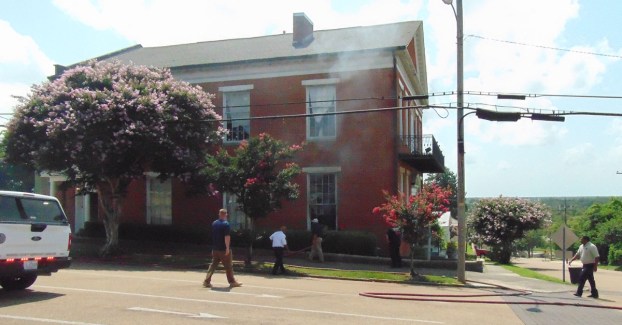 An afternoon fire damaged one room of the Agape Montessori Christian Academy on Monroe Street on Tuesday. The fire was contained and no one was injured. (Photo by John Surratt | The Vicksburg Post)

An afternoon fire damaged one room of the Agape Montessori Christian Academy on Monroe Street on Tuesday.

Firefighters received the call at 2:54 p.m. Vicksburg Fire Chief Craig Danczyk and Warren County Fire Coordinator Jerry Briggs were the first on the scene of the fire, which was in a first-floor room on the northeast corner of the building facing Monroe Street.

No one was injured and everyone in the building was able to escape.

“We did have flames showing,” Danczyk said, adding that Briggs got one exterior fire extinguisher while he got two fire extinguishers in the building and they were able to get the fire controlled “and bought a little time for the firefighters.”

“When I entered the building, we had visibility,” Danczyk said. “The fire was growing, but it was manageable and we contained it to one room.”

He said the combination of the extinguishers and the water from one of the trucks extinguished the fire. A check of the rest of the building indicated there was no other fire damage.

“We do not have a total loss,” Danczyk said.

The cause of the fire is was undetermined.

“This is one of those fires, if you have it at midnight, it’s something else,” Danczyk said. “The time of day was everything on this fire. If it happens at midnight, a passerby sees it and the flames are through the roof and it’s a total loss. That’s not one I want to deal with.”

The signs along East Clay Street call on Vicksburg residents to “Stop the truck stop,” referring to a proposed QuikTrip... read more