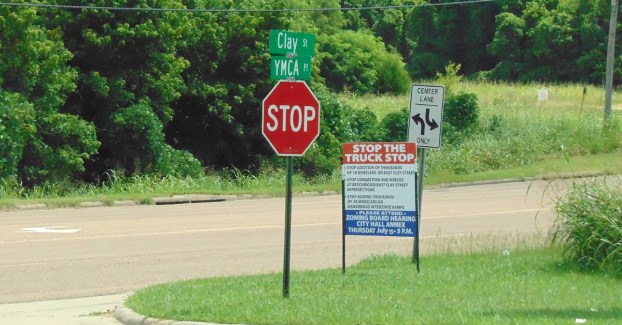 Signs that read “Stop the Truck Stop” are posted along East Clay Street and surrounding areas as many residents voice their opposition for the proposed QuikTrip convenience store location at the Beechwood Intersection. (Photo by John Surratt | The Vicksburg Post)

The signs along East Clay Street call on Vicksburg residents to “Stop the truck stop,” referring to a proposed QuikTrip fueling station to be built south of the Beechwood intersection of East Clay, Mississippi 27 and Mississippi 822, formerly U.S. 80.

Tulsa, Okla.-based QuikTrip, which wants to build the facility, has applied for a variance to the city’s zoning regulations to increase its store size from the 5,000 square feet set by city ordinance to 8,292 square feet.

A hearing on the variance will take place at 5 p.m. on Thursday in the boardroom of the Robert M. Walker Building, 1415 Walnut St.

According to plans on file with Vicksburg’s Community Development Department, QuikTrip proposes to build a 516,048-square-foot operation on 11.85 acres of land. Besides the convenience store, the complex will have room for 23 truck spaces, eight diesel bays with two pumps for diesel for cars and 10 gas bays. It also includes a truck scale.

It also presents the potential for increased 18-wheeler traffic on an already busy road, which has some people worried.

“My biggest concern is the 18-wheeler traffic,” said Jimmy Gouras, a former planner for the city of Vicksburg who has a master’s degree in urban and regional planning.

“I don’t oppose a convenience store, but the heavy volume of 18-wheeler traffic is what everybody I’ve talked to opposes,” he said. “They don’t think we need a truck stop and that’s what this is, we don’t need a truck stop out there at the Beechwood intersection.

“They’re going to have eight diesel pumps. That’s the same number that Love’s (truck stop in Flowers) has. I don’t know that it’s not reasonable to expect the same volume of traffic (as Love’s) or something close.”

According to traffic count information on the Mississippi Department of Transportation’s website, about 14,000 vehicles a day travel on East Clay Street according to information compiled in 2019, the most recent study. An additional 8,700 vehicles a day travel on the south end of Mississippi 27, along which Warren Central High School, Beechwood Elementary and the Vicksburg campus of Hinds Community College are located.

Approximately 7,000 vehicles a day travel Mississippi 822. The traffic counts, according to state officials, are done when schools are in session to get the peak traffic numbers. There are no current state traffic numbers that show the effect of Love’s Truck Stop on the Ceres Industrial Park or the Flowers exit. The most recent numbers are from 2019, and Love’s opened in February 2020.

Another concern, Gouras said, is I-20.

“(Central District Transportation Commissioner) Willie Simmons made the comment that Vicksburg had the worst interchanges in America,” he said. “We’ve got bad ones.”

Vehicles leaving the proposed QuikTrip headed west on East Clay have to get on the circular I-20 westbound entrance ramp and merge with westbound traffic.

“It’s dangerous when you’re in a car or a pickup truck; (with) 18-wheelers you’ve got virtually no distance and you make that loop at 25 miles per hour, and you get to the interstate and you have to merge into that traffic going 65, 70 miles per hour; it’s dangerous,” Gouras said.

Paul Ingram, an architect who has worked on car and truck fueling locations and convenience stores in Mississippi, Louisiana, Arkansas and Alabama, said there are only two ways for an 18-wheeler leaving QuikTrip to get on I-20.

“One is the very tight 25 mile-per-hour ramp that nobody likes to use to the west,” he said. Traffic often stops at that ramp to wait for traffic to clear. It is a very short, out-of-date merge lane. A stopped 18-wheeler will only reach about 27 miles per hour before it merges into 60 miles per hour traffic.”

The other westbound route, Ingram said, is for a truck to go north on U.S. 61 North and make a U-turn through the median cut in front of the Circle K and use that westbound entrance.

Philip Doiron, director of the Junius Ward Johnson YMCA, said that while the YMCA is pro-business and pro-expansion, the organization is concerned about “introducing a large number of truck traffic — 18 wheeler traffic — on that road.

“It’s just a concern for us because of our entrances and exits; getting kids and families, members in and out,” he said.

“I don’t represent anyone by myself and I’m not on anybody’s payroll,” Gouras said. “I love Vicksburg and I just know without question that what these guys are quoting is not a convenience store, it’s a truck stop and it’s going to generate 18-wheeler traffic and it’s going to create a bad situation.

“This doesn’t need to happen, and I really think common sense will prevail on this deal because it should happen. This is going to affect local businesses.”

A new technology, 911eye, is changing the way those in emergency situations communicate with first responders — and it will... read more