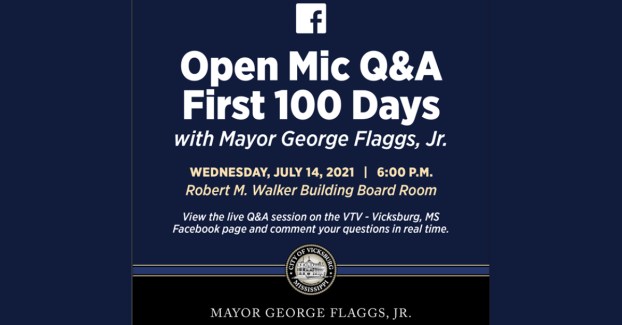 Mayor George Flaggs Jr. will hold an open mic question-and-answer session on Wednesday at 6 p.m. in the boardroom at the Robert M. Walker Building, 1415 Walnut St.

The event will be broadcast live through VTV, the city’s local access channel, and the VTV Facebook page. Viewers will be able to ask Flaggs questions and make comments about the city through Facebook.

“This is to get people’s input on their expectations for the next 100 days (of the new administration),” Flaggs said.  “That way, it will allow them to have input. They can Facebook, text or come in (to the boardroom) if they want to. It’s open to the public.”

The Board of Mayor and Aldermen were sworn in on July 1 and held the first meeting of its new term July 6.

The Vicksburg Post and Vicksburg Living received 25 awards — including seven first-place winners — in more than a dozen... read more