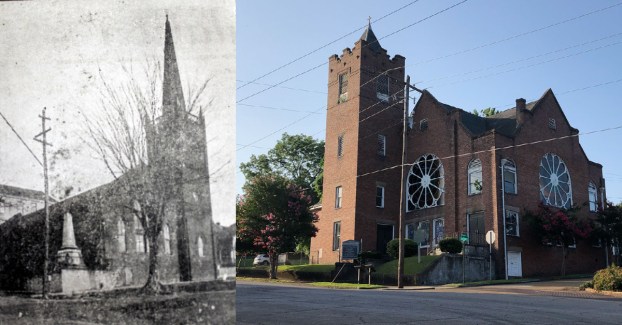 Bethel AME Church as it appeared in the early 1900s, and the building as it stands today. (Photos Submitted)

This Gothic Revival church was built in about 1830 on the southeast corner of Monroe and First East Streets as the Presbyterian Church.

The monument on the corner is the Bodley Monument, placed there “by a grateful community” after Dr. Hugh Bodley was killed during a raid on gamblers in 1835 while trying to fight lawlessness in the river city. In 1839, the city was looking for a place to install the monument, and the Presbyterians granted the spot where the monument stands, “provided the location should be used for no other purpose and should the monument ever be moved, the grant would revert back to the church.”

In 1855, the congregation moved to their new building on the northeast corner of Walnut and Clay Streets and they sold their Monroe Street building to John Critchlow and Lafayette Burr, who opened the Vicksburg High School in it in January 1856. By July 1856, the building was operated as a music school by William Hartwell, where he taught voice, guitar, strings and wind instrument lessons.

The building was then sold to the newly organized Bethel African Methodist Episcopal Church in the 1860s. Bethel, the first AME church in Mississippi, was organized in January 1864 by the Reverend Page Tyler of Indiana and was named for the denomination’s mother church in Philadelphia. Within this building, the first African-American Masonic Lodge in Mississippi was organized in 1875, as was Campbell College, which occupied the hall behind the church.

The church opened its doors for a wide variety of community activities including Republican committee meetings, the Colored State Bar Association, Knights of Labor meetings, the “Grand Polyhedron Entertainment” (amusements, rides, food and a swing capable of holding eight people at one time), and even classes for the Main Street School when their building was being renovated. In 1881, the tower on the right side was added, the interior was “Frescoed” and other updates were completed.

In March 1889, the church hosted a concert by Flora Batson, hailed as the “greatest colored singer in the world.” The advertisement in the Vicksburg Evening Post stated that Miss Batson “will wear in these concerts the magnificent crown with which she was crowned ‘Queen of Song’ by the citizens of Philadelphia, the splendid diamond cut beaded necklace, presented by citizens of New York; and the superb diamonds presented by citizens of Providence, R.I.”

There was so much interest in the concert by both Black and white people that the community requested the concert be moved to the Opera House, but Miss Batson would not hear of it and wanted it to remain at the church. The same thing happened when the church announced the speaking engagement of Booker T. Washington in 1901.

In 1909, the church began plans to demolish the old building and to build a new church. They wanted to take up the entire lot and asked the city to remove the Bodley Monument to a new location. In a petition, the church members stated that the current location of the monument did not mark Dr. Bodley’s resting place nor the place where he was killed and that they believed that a more suitable and accessible site should be chosen.

The city agreed, stating that it was important to preserve the monument as the death of Dr. Bodley was “not only an (sic) historic event of much importance to Vicksburg, but the incident was one which attracted attention throughout the entire country.”

The plan was then approved for the monument to be removed to the Rose Garden on Monroe Street, with Bethel footing the bill. Objections to this location led the city to ask the county to place the monument on the grounds of the courthouse, to which Sheriff Kelly said no.

It was then suggested that it be moved to the city cemetery. Finally, in February 1910, the city board voted to move it to city-owned land on the triangle of Openwood, First East and Farmer Streets, where it remains today. Plans for the new church were advertised for bids in June 1910, but by March 1911, the work had not yet begun because “a hitch had arisen between the contractor and the congregation.”

In February 1912, the old church was in the process of being demolished and the groundbreaking for the $18,000 church took place on March 3, 1912. The building remains the home of Bethel AME Church today.

The children of Warren County are facing a life-or-death situation. Gun violence is sweeping the community at a high rate,... read more