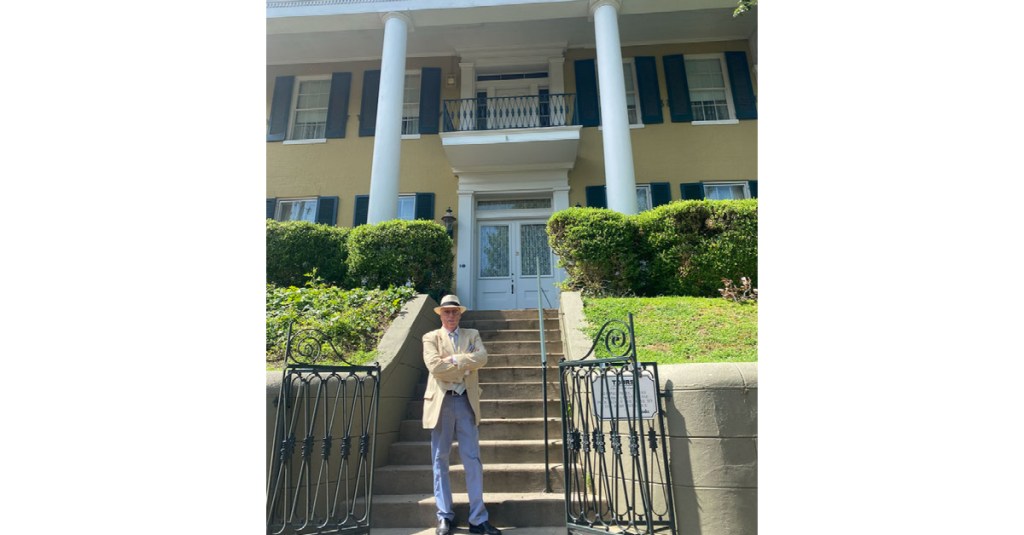 When Tom Pharr was a teenager, he worked at Anchuca, the historic mansion and first bed and breakfast in Vicksburg, folding towels, washing dishes and mowing the yard.

He remembers speaking to the then-housekeeper while folding towels together and he told her one day he wanted to own a house like Anchuca. To which he received a response from her of, “People like me and you, we work in houses like Anchuca, but we don’t own them.”

He said that conversation with the housekeeper did not deter him, but rather confused him because it was so different from the teachings he received from his parents and grandparents growing up.

“We live in the United States of America and you can do anything you want to do,” Pharr said. “I’ve learned if you’re persistent enough, don’t take no for an answer and can think it and dream it then you can make it happen.”

Pharr had lived much his adult life in Atlanta, Ga., working in an architectural design career that he credits to being inspired by Anchuca. In his late 30s, he recalled beginning to feel burned out of that career, even though he enjoyed it. When the opportunity arose to move back to Vicksburg and purchase Anchuca to fix it back up from its decline, Pharr said he felt drawn to the opportunity but was once again met with discouragement from his friend who worked as his assistant in Atlanta.

“Everybody was telling me that would be the worst thing, that my career was going so well and I didn’t need that distraction,” Pharr said.

However, Pharr went on despite people’s discouragement, and this year he’s celebrating his 20th year as owner of the very home that began as his teenage dream, Anchuca.

“Anchuca has proven to me that I can accomplish anything I want to,” Pharr said.

Pharr said his grandfather instilled in him that you need to leave your community better than you found it, and Anchuca has become a way that he can fulfill doing his part for the neighborhood. He is passionate about the restoration and upkeep of the historic buildings, homes, and streets of Vicksburg because, he said, they tell history better than any textbook could that promotes understanding.

“Our job is to learn and to grow and continue to make the world a better place,” Pharr said. “The only way you do that is through education and life experiences.”

For him, it is important to educate the tourists that come to Vicksburg on the importance of the history that has happened here, even if it doesn’t align with what is acceptable in the present day, such as the Confederate monuments.

He said this history is what evolved Vicksburg into the town that is, one where tourists often say to him that everyone is so kind and welcoming. However, to Pharr, this is the norm and he pities those who live in places where they don’t know their neighbor because fear comes in the unknown. Pharr said Vicksburg provides closeness as a community and celebrates the diversity of the community.

“River towns are especially so unique because you have so much especially different dichotomy,” Pharr said. “You can go on this one block and it’s not rich, it’s not poor, it’s not black, it’s not white, this is uniquely an American place.”

Pharr said celebrating this uniqueness is what moves the country forward. He said this theme of moving forward is important to understand when learning the history of Vicksburg and the civil war.

“I don’t think it’s our duty to go back in time to tell people they were right or wrong,” Pharr said. “You have to accept their life for what it was and then look in the mirror at yourself and improve upon it.”

He said we have to have empathy and respect for those who became before us so we can learn from it and move forward. He said it is important to share this history, even when it is difficult to understand, in order to make changes to continue to better the country.

“By touring places like this, we can be given a better understanding of humanity and how we all strive to be better,” Pharr said. “Hopefully we can move this nation forward by not forgetting our past.”

Pharr said to him this is the point of tourism and why it is so important to care for the Anchuca and the surrounding neighborhood — to preserve history and share with others.

Pharr takes the point of preservation into his personal life to remember his past. In this 20th year of Anucha, he wore the same suit that he wore in his first newspaper cover in 2001.

“I know it’s out of fashion, but I wore this sport coat for my first interview with The Vicksburg Post when I decided to come home and buy Anchuca,” Pharr said. “I thought how appropriate (to wear now?) And this is why we save things.”

With 20 years at Anchuca behind him, Pharr said he hopes the next 20 years will be full of more education, preservation and connections. During his years at Anchuca, he has seen engagements, couples coming back to stay in their honeymoon suite from 30 years prior, and people crossing the Mississippi River off their bucket list. He said what keeps him going is the people and getting to be part of their experience of Vicksburg.

“I enjoy the interaction,” Pharr said. “I am so fortunate to be here doing this work.”

To further the preservation of the historic homes in Vicksburg, Pharr is currently working on building Springfield Cottages which are meant to be new, modern homes for younger couples while still fitting the historic fabric of the neighborhood.

“The cottages will help secure real estate values around historical properties and will be a saving grace for properties like Anchuca,” Pharr said.

The cottages will be built on vacant lots in the neighborhood to raise the property value for all the homes they will surround. This is how Pharr plans to ensure a future for all the historic homes in the area.

To book a stay at Anchuca, learn more about its history and future or view dining options in the home, visit their website here.