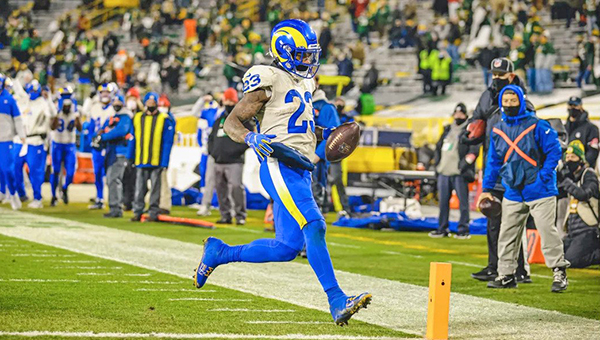 LOS ANGELES (AP) — Los Angeles Rams running back Cam Akers is out indefinitely after tearing his Achilles tendon in an offseason training session.

The Rams confirmed the injury Tuesday, one week before veterans report to training camp.

The former Clinton High School star was expected to be the Rams’ starter in the backfield after coming on late in his outstanding rookie season. Akers had 272 yards from scrimmage and two touchdowns in the Rams’ two playoff games, capping his rookie year with some of his best play. He rushed for 131 yards and a touchdown in a 30-20 win over Seattle in an NFC wild card game.

The injury is a blow to Rams coach Sean McVay’s plans to build an elite NFL offense around quarterback Matthew Stafford, who was acquired in a blockbuster trade with Detroit for Jared Goff early in the offseason.

Akers intended to play a primary role as an every-down back for the Rams after sharing carries as a rookie last year with Darrell Henderson and Malcolm Brown in the team’s first season following Todd Gurley’s departure.

Akers got 14 carries in his NFL debut, but didn’t get that many touches again until December. The Florida State product took over the primary ball-carrying role for four of Los Angeles’ final five regular season games, averaging 3.95 yards on 86 carries — including a career-high 171 yards against New England.

Henderson — another Mississippi, from South Panola High School — is still with the Rams, while Brown left for Miami. Los Angeles also has Raymond Calais and Xavier Jones, who both have limited NFL experience, along with rookie seventh-round pick Jake Funk.

The Rams’ veterans will report to UC Irvine on Tuesday, July 27, with their first practice the next day.