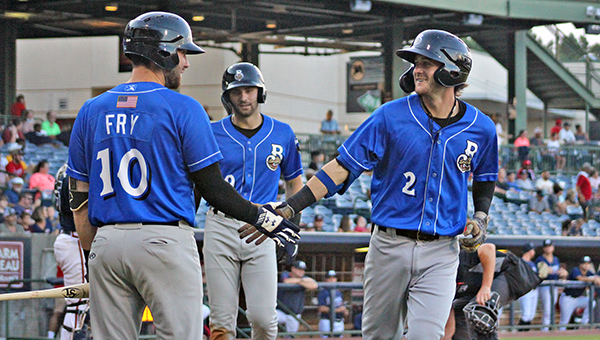 PEARL — A couple of home runs and a bit of hustle provided enough offense for the Biloxi Shuckers to beat the Mississippi Braves on Thursday.

Ryan Aguilar and Brice Turang both hit two-run home runs in the third inning, and the Shuckers manufactured a needed insurance run in the fourth on their way to a 5-4 victory at Trustmark Park.

The two home runs put Biloxi ahead 4-0. The M-Braves got a run back in the bottom of the third inning when Greyson Jenista scored on a groundout, but the Shuckers answered quickly.

Luis Castro drew a walk to start the inning, moved to second on a wild pitch, advanced to third on a groundout and scored on a single to center field by Brent Diaz to push the lead back to 5-1.

The M-Braves got within striking distance in the bottom of the seventh inning. After Peter Strzelecki hit the first two batters he faced, Wendell Rijo belted a three-run homer, his ninth of the year, to bring Mississippi within a run at 5-4. The M-Braves weren’t able to get any closer, though. Reliever Robbie Hitt worked out of the jam in the seventh inning, and Matt Hardy finished for a four-out save, his fourth of the season.

The M-Braves only had two hits in the game — Rijo’s homer and a single by Trey Harris in the sixth inning. Harris’ hit was Mississippi’s first of the game. Nick Bennett walked six batters in 4 1/3 innings, and Biloxi’s pitchers issued seven walks and hit three batters in all.

The M-Braves (40-29) lost their third consecutive game to the Shuckers (22-45), and fifth overall. They still lead the Double-A South South Division by three games over Montgomery.

The six-game series continues through Sunday at Trustmark Park in Pearl. Promotions for the weekend include a Mississippi state flag hat giveaway to the first 1,000 fans on Friday; postgame fireworks on Saturday; and Autism Awareness Day on Sunday.

On Sunday, the M-Braves will wear special autism awareness jerseys that will be auctioned off for charity. Sunday’s game begins at 2:05 p.m. Friday’s game starts at 6:35 p.m., and Saturday’s at 6:05.