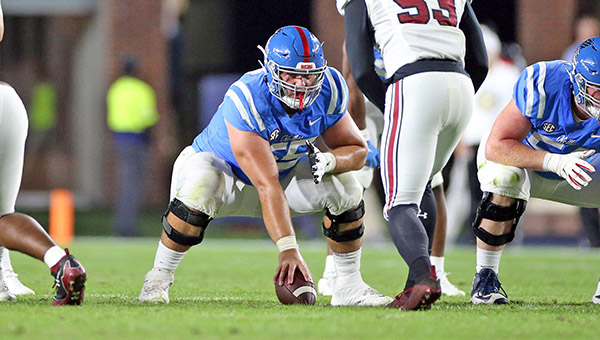 For three years, Ben Brown has been a fixture on Ole Miss’ offensive line. On Friday, he earned a little recognition for it.

The Ole Miss center and Vicksburg native was one of five Ole Miss players selected to the preseason All-Southeastern Conference team, as voted on by members of the media during the league’s Media Days this week.

Brown, a former St. Aloysius star, was a third-team All-SEC pick. He has started all 34 games of his college career, first at right guard and then at center. He did not allow a sack in 432 pass attempts last season, and played all but eight snaps in 10 games.

Joining Brown on the preseason All-SEC team from Ole Miss were first-team selections Matt Corral at quarterback and Jerrion Ealy as a return specialist and all-purpose player; and offensive lineman Nick Broeker and punter Mac Brown as third-team selections.

Ealy, who garnered first-team honors as both a return specialist and all-purpose player, led the Rebels in all rushing categories in 2020 with 147 carries for 745 yards and nine touchdowns. He also had 15 catches for 155 yards and one touchdown.

A total of 80 players were selected for the preseason All-SEC team. Only one, offensive lineman Charles Cross, was from Mississippi State. The sophomore started all 10 games and was a Freshman All-SEC selection in 2020.

Defensive back Derek Stingley and punter Cade York were LSU’s only first-team picks, but the Tigers had five players on the second team — defensive lineman Ali Raye and defensive back Elias Ricks on defense, and linemen Ed Ingram and Austin Deculus and wide receiver Kayshon Boutte on offense.

Alabama received 130 of 134 first-place votes to win the West Division championship. Ole Miss, Texas A&M, LSU and Arkansas each got one.

Georgia received 124 of 134 first-place votes to win the East, with Florida (7), Kentucky (2) and South Carolina (1) receiving the others.

Ole Miss, Texas A&M, Florida, Kentucky and South Carolina each received one first-place vote to win the SEC championship. Alabama got 84 and Georgia had 45.