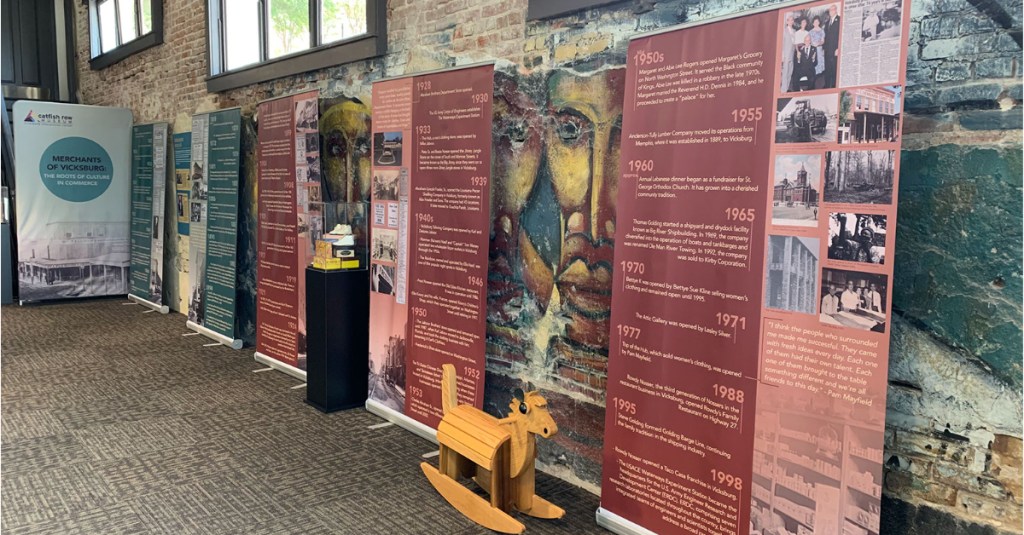 Telling Vicksburg’s story is the aim of the Catfish Row Museum and since opening this year, visitors from across the globe have had the opportunity to view Vicksburg’s history.

In February, the museum focused on Black History and its relation to the River City; in March, the focus was on Women’s History.

At the end of May, the museum began showcasing Vicksburg merchants with the popup exhibit entitled “Merchants of Vicksburg: The Roots of Culture in Commerce.”

The exhibit, which will run through the end of July, takes visitors on a journey beginning in 1805 when the roots of commerce began to take hold in Vicksburg.

It continues through the 1990s when, in 1998, Rowdy Nosser opened a Taco Casa franchise.

“With the rich diversity here in Vicksburg and the many ethnic groups that settled here as merchants, we wanted to tell that story,” museum founder Linda Fondren said.

One of the merchants that particularly stood out for Fondren was The Hub, she said.

The Hub, which was a men’s clothing store, opened in 1933 and was owned by Mike Jabour.

“The Hub was a place where African Americans could go and shop and if they did not have money, they could trade. At The Hub, they were also waited on and treated equal,” Fondren said. “So, from an African American point of view, it was always a shop you could go in and you felt okay about going in.

“Pam Mayfield’s family owned The Hub and I was really excited to find information about it.”

Also on display at the museum are pairs of baby shoes worn by Norma Massey, who now owns Frederick’s Shoe store, which opened on Washington Street in 1950.

The Catfish Row Museum, 913 Washington St., will exhibit from 10 a.m. to 3 p.m. Tuesdays through Saturdays.

For more information about the Catfish Row Museum, visit catfishrowmuseum.org.