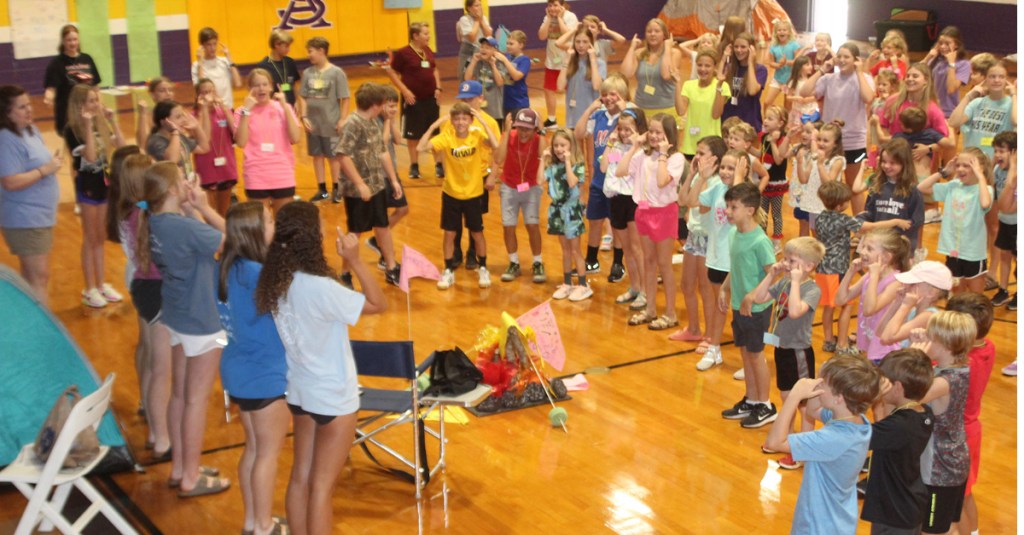 Children participating in the weeklong vacation Bible school hosted by Vicksburg’s three Catholic churches learned about God, creation and the fruits of the Holy Spirit. (Photo by John Surratt | The Vicksburg Post)

Tuesday morning, children gathered at the St. Aloysius gym to have fun and learn about God and their faith.

The weeklong vacation Bible school was open to children in kindergarten through 6th grade who attend one of Vicksburg’s three Catholic churches. The theme was “Camping in God’s Creation,” complete with tents, a campfire and cabins, each named for one of the 12 fruits of the Holy Spirit.

And the campers were able to relate to their teachers, who were St. Aloysius students.

“They’re planning the lessons and they’re doing the teaching and taking the kids around and doing all the activities with them,” said Joan Thornton, a theology teacher at St. Aloysius and VBS director. “We’re doing crafts and games and they get a scripture story every day.”

Traditionally, she said, the city’s Catholic churches alternated hosting vacation Bible school, but when St. Michael announced it would not host VBS this year, the school volunteered to host it with junior high and high school students serving as counselors, assisted by adults.

The idea to let the teens run the program, Thornton said, originated in her ninth-grade theology class.

The student teachers include teens from grades 7 through 12, she said.

One advantage to having vacation Bible school at St. Aloysius, Thornton said, was the space available for the program. Besides the school gym, the students were able to do activities in school classrooms and the cafeteria.

“We were able to spread out,” she said.

The program, she said, drew a good response from children and the volunteers.

“I have 90 children and 20 teenagers,” she said. “They’re using my classroom; I have eight children in my classroom.”

The program ended on Friday with a scavenger hunt to find things about God and creation, singing around the campfire and a lesson of the ascension of Christ into heaven taught by Tristian Stovall, a seminarian assigned to St. Paul for the summer.