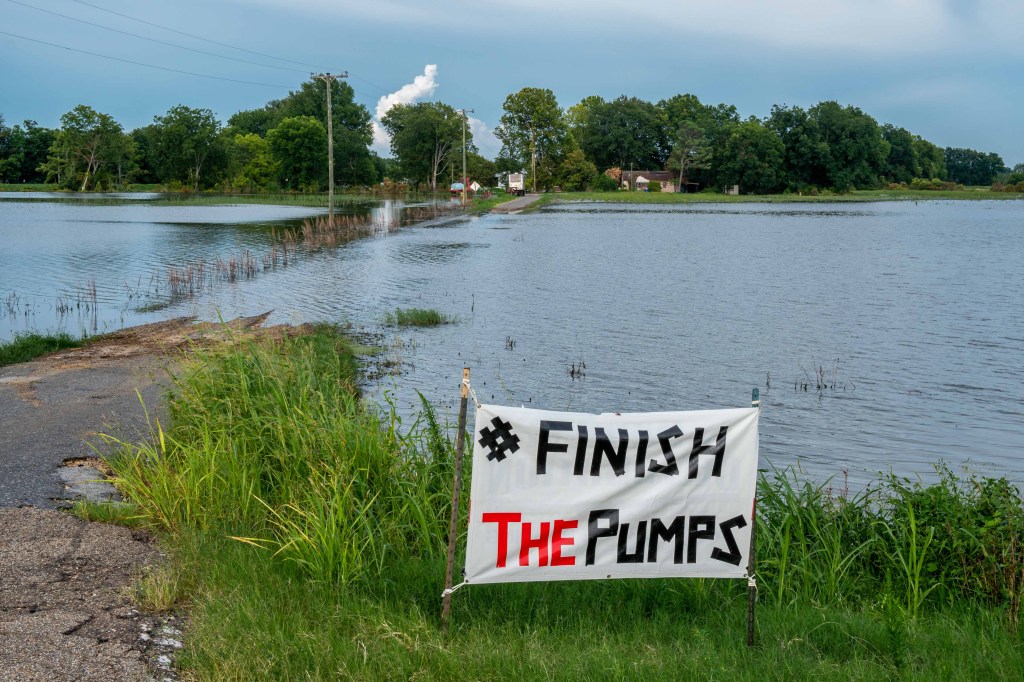 Wicker, the ranking member of the Environment and Public Works Subcommittee on Chemical Safety, Waste Management, Environmental Justice and Regulatory Oversight, made his comments supporting the Yazoo Backwater Pumps project during a hearing to examine the current issues adversely affecting environmental justice.

“To begin with, I think we should define what we mean by ‘environmental justice’ and I think really a better topic. … is ‘environmental injustice,’” Wicker said in his opening statement.

Wicker said the federal government approved a plan to relieve flooding in the Delta in 1941, but 80 years of bureaucratic delay has kept the Yazoo Backwater Pumps project from moving forward.

“Regular flooding reinforces this cycle of poverty, because residents lack the certainty they need to build homes and establish new businesses,” Wicker said.

During his line of questioning, he said the Yazoo Backwater Pumps have not been completed despite the support and approval of local stakeholders, the Army Corps of Engineers, and environmental groups and the impact of the delay has been devastating for the region.

“The entire population of Sharkey County — it’s gone from 15,000-plus to 4,400-plus since 1940,” Wicker said. “At the very time when the residents of the South Delta have been crying out to complete this.”

Harden said the South Mississippi Delta is one of the poorest areas of the nation where 27 percent of the residents live in poverty and more than 62 percent of residents are minority.

“Floods — or preparation for floods — are a constant fixture of our lives,” she said. “Growing up, I remember packing each spring what we needed to survive and being ready to leave home at a moment’s notice.”

Harden said the Yazoo Backwater Project is comprised of three key features — levees along the Yazoo River completed in 1978 that keep water within the river during high water; the Steele Bayou gates on the Yazoo completed in 1969 to prevent the Mississippi from flowing back into the South Delta and the pumps.

The pumps, which would pump water over the levee when the Steele Bayou gates were closed, she said, were the final unfinished feature.

“This system is interconnected and without all three functioning features, it just doesn’t work,” Harden said.

She said she and her husband Tim purchased Chuck’s Dairy Bar when their family farm sold in 2006.

“Chuck’s has been in business since 1977. It is a fixture in Sharkey County — one of the few we have to serve our small community,” she said. “It’s a local hangout for everyone in Rolling Fork. We try to keep our prices low to make sure all our neighbors, over one-third of whom are living below the poverty line, feel welcome.”

“The 2019 flood inundated 548,000 acres: 231,000 acres of cropland, and 686 homes,” Harden said. “Water was so high, we were fractions of an inch away from losing critical infrastructure, like our sewer systems. We call it the ‘Forgotten Backwater Flood’ because it received so little national attention despite shattering many records.

Annual flooding, Harden said, has an enormous, lasting impact on the region well beyond people not being able to frequent Chuck’s Dairy Bar because they’re not making a paycheck. Populations are decreasing, economic opportunity is fleeting, and lives and livelihoods are being lost.

“In 2019, we saw the worst of it,” she said. “Two residents even lost their lives in that flood. But unfortunately, the residents of the South Delta know we haven’t seen the last of it.

“What we desperately need to stop the annual flooding in the Yazoo Backwater Basin is the final component of the project: the backwater pumps,” Harden said. “This project is a compromise and has the support of various environmental groups — including the Mississippi Wildlife Federation and the Nature Conservancy. In its environmental justice analysis, the Army Corps concluded that the backwater pumps would specifically benefit our community of color.”

The Corps of Engineers put its final approval on the Yazoo Backwater Pumps Project, publishing its Record of Decision on Jan. 15.

The Record of Decision detailed the Corps’ decisions on the issues discussed in the final supplement to the 1982 Yazoo Area Pump Project Final Environmental Impact Statement, which was published in the Federal Register in December 2020.

The pumps are the subject of a lawsuit filed by American Rivers, National Audubon Society, Sierra Club and Healthy Gulf, which was filed in federal court in Washington, D.C. last Wednesday against the Corps and U.S. Fish and Wildlife Service.

The same group already sued the Environmental Protection Agency in January in an attempt to block the construction of pumps.