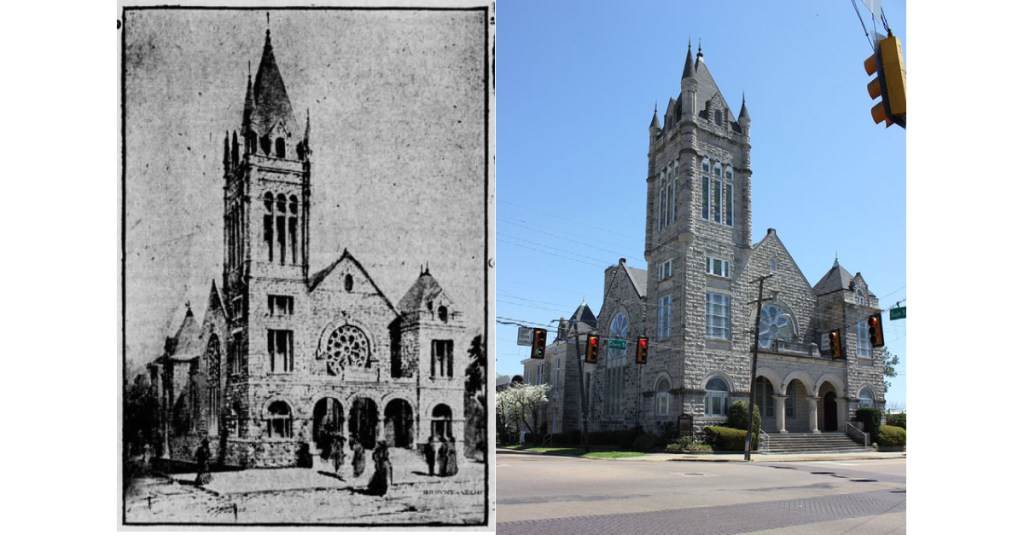 First Presbyterian Church as it was after construction and as it stands today. (Photos Submitted)

In late February 1906, the congregation of First Presbyterian Church chose Reuben Harrison Hunt, a well-known architect in Chattanooga, to design its new Romanesque Revival home to be built on the southeast corner of Cherry and South streets.

They then hired Hallas and Company from Jackson to build the building, to start in 30 days and finish in 8 or 9 months. Land was put in charge by Hallas, but as he was making plans, his wife died in March, which delayed the construction start until April 9. The stone was purchased from Bedford, Ind.

The building was completed by Hull Construction Company with W.H. Bruser completing the tin, slate and copper work. The Vicksburg Post reported that the building, with pews, heating, light fixtures and organ cost “in the neighborhood of $45,000.”

A significant portion of these funds were raised by the ladies of the church who held “exchanges” in their homes for several years. The Valley Dry Goods Store also held a “Presbyterian Day” which was similar to McAlister’s modern-day version where school groups and nonprofits act as waiters for a night and a portion of the sales is donated to the group.

The Valley advertised that Presbyterian ladies would be the salesladies for a day and a portion of the sales for that day was donated to the building fund. The paper listed the salesladies for the day and even said that chaperones would be on hand for the young ladies. The church held its first services in the Sunday school room on Jan. 26, 1908, because the sanctuary was not yet complete. The church building remains one of the most significant buildings in Vicksburg. The drawing was rendered by architect R.H. Hunt.

GUIZERIX: My short-lived stint as a child star