Windows from historic Vicksburg Jewish temple up for auction 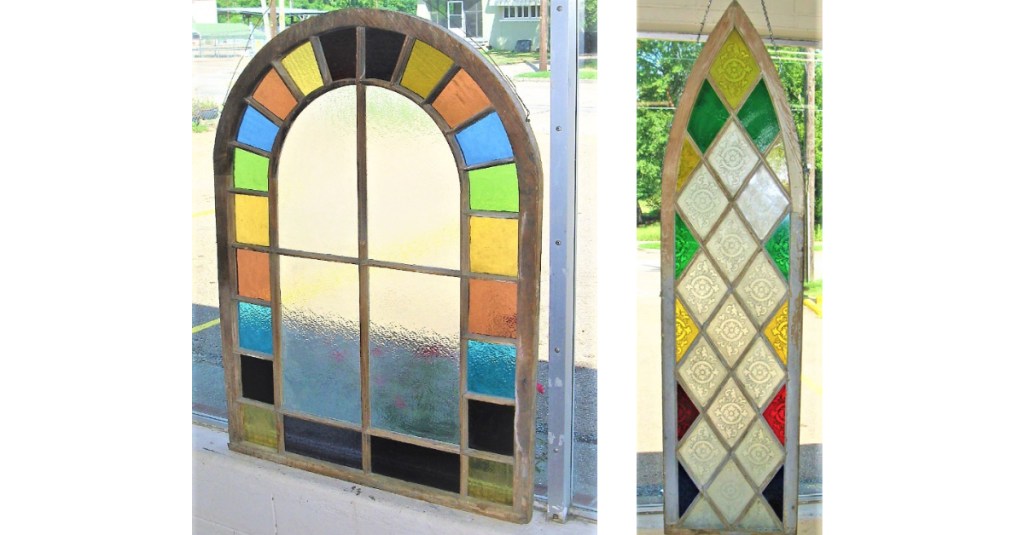 The two 151-year-old stained glass windows, reminders of Vicksburg’s once-thriving Jewish community, are all that remain of Temple Anshe Chesed, which served the city’s Jewish community for 99 years, from 1870 until 1969, when a new temple was built near the Anshe Chesed cemetery. The temple was the first synagogue built in the state of Mississippi.

The windows — one 7 feet 3 inches tall and the other 5 feet 9 inches tall — are being sold at auction through Katzenmeyer’s Mississippi Auction/Estate Sale Services.

Owner Hardy Katzenmeyer said he got the windows from a friend.

“I can’t say for sure, but I think they were (located) in the back (of the temple),” he said. “I’ve looked at the pictures (of the temple) all over. There’s some ‘could bes,’ but I do know the back of the temple had windows across there, because I was in there as a young man and opened the windows for a purpose.”

According to Nancy Bell, executive director of the Vicksburg Foundation for Historic Preservation, the history of the Jews in Vicksburg is an integral part of the story of the city.

Jewish men and women were business owners, physicians, lawyers and teachers and also served on the elected city and county boards.

One of the first elected officials was M.A. Levy, who was a city selectman in 1832. Another, Levi Lowenberg was elected justice of the peace in 1863 and served until 1900. Abe Kiersky was the city’s tax assessor from 1889 to 1937.

The majority of Jews in Vicksburg were involved in retail and wholesale businesses and as cotton brokers or factors (agents). The 1866 city directory listed 90 Jewish families owning 35 stores, and Jews owned some of the largest commercial businesses in the city.

Charles Ehrman and his children owned a chain of nine meat markets and Charles served in the Mississippi Legislature. Baer and Brothers Dry Goods Store was started in 1865 and by 1871 employed 70.

The Cotton Exchange was founded in 1874 and incorporated in 1886. In 1890, there were 22 active members and nine were of the Jewish faith.

Temple Anshe Chesed was built on a lot on the east side of Cherry Street near the corner of Clay Street, where the Fastway convenience store is now. The lot was bought by the congregation on July 29, 1868, for $3,500. The temple was demolished in 1983 after numerous attempts to save it failed.

Having a piece of the city’s history, Katzenmeyer said, gives the windows special meaning.

“I feel it’s something you have to take care of and respect and handle it carefully; it’s not a piece of merchandise,” he said. “It looks like two panes (on the small window) may have been replaced somewhere along the line. The long one has two little cracks that you have to look at very carefully to see; I would almost say age cracks.

“As a matter of fact, I didn’t notice them. One of the other people with better eyes (looking at the windows) pointed them out to me,” he said.

Katzenmeyer said the windows have generated a lot of interest.

“We’ve had people come in here and look,” he said, adding some people who worshipped in the temple have come to look at the windows.

Katzenmeyer said bidding on the windows is open until mid-August. So far, he said, he has received one bid for the windows, which has been posted on the company’s website, www.katzmsestatesalesauctions.com.

Usually, with items like the windows, he said, people will call in bids at the last minute by the Aug. 15 deadline; “Late in the game.”

“A lot of people are interested in stained glass,” he said. “A good piece of stained glass that somebody made down the street is very desirable. That’s very difficult to do; it takes a long time and a lot of skill and artistry.