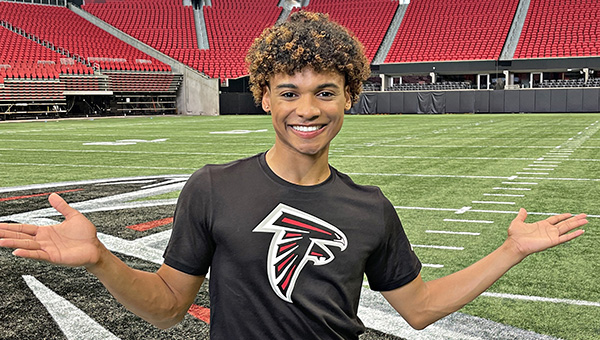 Vicksburg native Dante Sanders stands at midfield of Atlanta's Mercedes-Benz Stadium on Sunday, after he was selected as a member of the 2021 Atlanta Falcons Cheerleaders team. Sanders was selected from a pool of 300 applicants who endured a three-month tryout process. (Photo submitted to The Vicksburg Post)

Three years ago, Dante Sanders helped break down barriers as one of the first male members of the New Orleans Saints’ cheerleading squad. Now, he’s making a little more history.

Sanders, a Vicksburg native who recently moved to Atlanta, was selected to be part of the Atlanta Falcons Cheerleader team on Sunday. He is believed to be the first man to be on two NFL cheerleader teams.

Male cheerleaders were not included in the NFL until 2018. The Falcons had two men on their 40-person squad in 2020.

“It was an amazing feeling” to be selected, Sanders said. “I’m not the first male cheerleader for the Atlanta Falcons, but I am the first to cheer for two teams in the NFL.”

The 26-year-old Sanders was part of the Saintsations team in 2019 and 2020, but moved to Atlanta earlier this year to be closer to family members who had also relocated.

The St. Aloysius High School graduate said he enjoyed his time working with New Orleans’ NFL franchise and wasn’t ready to give it up just because he changed cities.

“The whole NFL cheerleading thing has been a dream for me and I wasn’t ready to give it up just yet,” Sanders said. “I knew the Atlanta Falcons was an opportunity that was on the table. It was a difficult decision to not audition for the Saints, but I just went for it.”

Sanders sent his application to the Falcons in the spring and embarked on a multiple-round tryout process that lasted three months. Sanders first sent a solo video of his dancing, then in the second round had to quickly learn the choreography for a dance routine to be performed in person. Interviews with judges and coaches were also part of the selection process.

Although he’d been through it before, Sanders said he was actually worried his past experience would hurt him. He wasn’t sure if the Falcons would regard his work with another NFL team as a positive or a negative. Each team has different dance styles, he said, and he was nervous about whether the Falcons’ and Saints’ styles meshed.

“That was something I was worried about,” he said. “One of the coaches for the Falcons started with the Tennessee Titans before she came to Atlanta. When we had our interviews we got to discussing that, and that eased my mind.”

Besides worrying about how the team’s coaches would view it, Sanders said his past experience with the Saints helped him during the long tryout process.

“It helped me so much. It motivated me to keep the momentum going. Being an NFL cheerleader, you learn so much about yourself and life skills. It definitely did give me the confidence to pursue my dream,” Sanders said.

The tryout process that began in May finally came to an end last weekend, with a cheerleader bootcamp at Mercedes-Benz Stadium in Atlanta. Seventy finalists — from an initial pool of more than 300 applicants — performed dance routines in front of a panel of judges, along with interviews and other activities.

On Sunday, Sanders was one of 40 people selected for the 2021 squad.

“I was one of four people they called to the back to tell and they videoed our reactions. My reaction was crazy,” Sanders said with a laugh, adding that the thought of cheering for a second NFL team was “Weird. And then just being in the NFC South and going from one rival team to another. I’ve already gotten some ‘Dirty Bird’ comments.”

After working hard to make the squad, Sanders said the real work is just beginning. The next two weeks will be filled with learning new routines and choreography, photo shoots, team events and public appearances leading up to performing on the field for the Falcons’ preseason opener on Aug. 13, at home against the Tennessee Titans.

“We are hitting the ground running,” Sanders said. “I always say that we work almost as hard as the players because of all the things we have to learn and the time we put in. It’s a job. It takes a lot of hard work and dedication. It takes a lot of physical and mental strength to be an NFL cheerleader.”