‘Up the Ante’: Vicksburg Alderman Mayfield says city going to get tougher on derelict properties 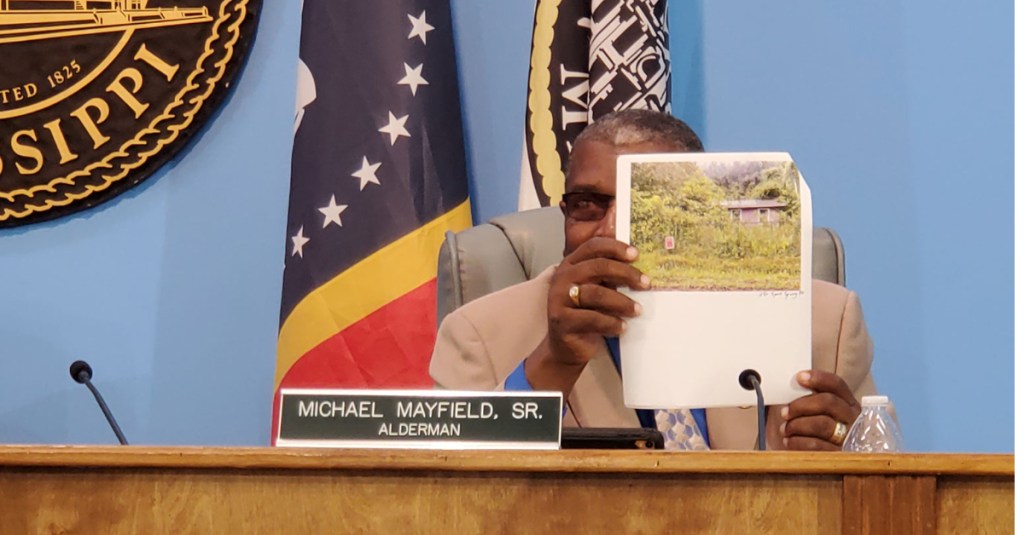 North Ward Alderman Michael Mayfield displays a photograph of a derelict yard at Monday's meeting of the Board of Mayor and Aldermen. The board has indicated it plans to begin cracking down on people who refuse to clean and clear their properties. (By John Surratt | The Vicksburg Post)

Property owners who fail to take care of their property inside Vicksburg city limits could find themselves facing a judge and a fine if they violate the city’s building and sanitation codes, North Ward Alderman Michael Mayfield said Monday.

The city’s code of ordinances requires property owners to keep their yards cleaned and maintain buildings on their property. Some people, however, have refused to do so, forcing city officials to cite the property as a public nuisance and force the owners to clean their property.

Mayfield said he was frustrated dealing with people who have consistently failed to fix their property after being told.

“This is four or five weeks running that most of these people have not complied with what we’ve asked them to do,” Mayfield said.

He held up a picture of an overgrown property with a dilapidated house on Spouts Spring Road and asked VTV’s crew to focus a camera on the picture.

“For those of you who can see this picture, I want to ask the general public if there is anyone out there that don’t have a problem with having to live around this,” he said. “If you don’t have a problem living around this, then you call me and I’m going to find you someplace else to live because this is deplorable; this is what we deal with every day here in the city of Vicksburg.”

He later called the property “probably one of the worst that I’ve seen… we’re going to end up taking these people (the owners) to court.”

Mayfield said many property owners “are going to find themselves in court because we have another list here today (and) after five meetings, nobody; nobody on this list has complied with what we’ve asked them to do. You should be ashamed of yourself. You have to do what’s right by your community.”

In the 16 years he’s been on the Board of Mayor and Aldermen, Mayfield said, there are very few meetings where he doesn’t talk about what city officials have to do to get people to get their property to meet the city’s minimum standards under the city codes.

“We all see what is going on in this city,” Mayfield said. “We have to put forth every effort possible to bring this city back where it should be.”

He called the way some people react when asked to clean and clear and remove inoperable vehicles from their property “appalling.”

Mayfield gave his office and cell phone numbers, telling people, “If you have a problem, I ask you to call me. I’m out there, I’m riding, I’m talking to people every day; I see what’s going on.”

“It has to get better,” he said. “At one point I was calling people’s names on the air about who owns these (derelict) properties. I’m almost to that point again because so far we end up sending people to court and when they go to court and they have to pay a fine and they have to go back and work on that property they get very angry with me — I can stomach that if you go on and take care of your property.”