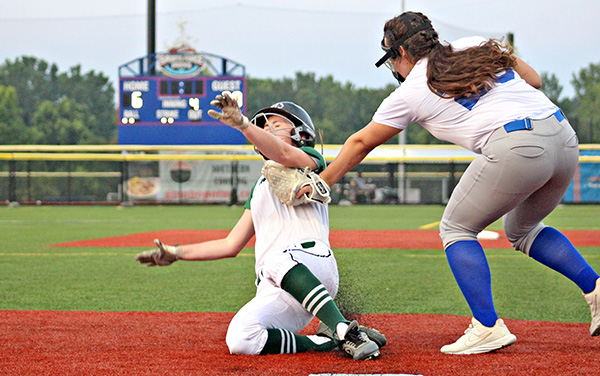 Porter’s Chapel Academy did a good job hitting the ball Thursday, and scored enough runs to win a lot of games. Its defense also played pretty well and made plays whenever it had the chance.

The problem was, it didn’t get nearly enough chances.

PCA pitchers Sophie Masterson and Raegan Thornell combined to walk 14 batters — including 10 during a 13-run second inning — to offset an otherwise respectable performance in a 21-9 softball loss to Cathedral.

Although Masterson and Thornell nearly matched their walk total from PCA’s first four games combined, coach Chandler Upton said it was hard to be upset with her two inexperienced pitchers. Thornell only pitched in two games last season, and Masterson threw 19 1/3 innings spread across six games.

“Honestly, I can’t say much about it being bad because Sophie’s only been pitching for maybe a year and a half.

Raegan is taking lessons just to help the team since we lost a pitcher,” Upton said. “I’ve been telling them to throw strikes, and us as a team have to make sure we’re behind them 100 percent when it comes to fielding the ground balls that get hit and on offense. It’s their first year pitching, basically, so I just try to keep them positive and make sure everybody is backing them up.”

Their teammates did that, to an extent. Katie Tillman hit an RBI single and scored on a ground out in the bottom of the first inning to put the Lady Eagles ahead 2-1, and they scored multiple runs in each of the game’s four innings.

Tillman and Olivia Masterson both finished 2-for-3 with a double, Hannah York had a two-out, two-run single to stave off the run rule and extend the game in the third inning, and Marley Bufkin hit an RBI single in the second.

PCA (1-4) had scored a total of three runs in its last two games, so scoring nine was encouraging, Upton said.

“I trust them with the bats. We went from our first game with only scoring one, then the second game scoring two. Then, at our tournament, we scored a lot more runs and we beat a team. We can hit,” Upton said.

Unfortunately, they needed to hit a lot more on Thursday to keep up with Cathedral (1-2).

Masterson walked two batters to start the second inning, and both scored on a base hit by Kinslee Young. Lauren Dunbar followed with a three-run home run over the left field fence to put Cathedral ahead 6-2, and then the walks started pouring in.

Masterson and Thornell combined to walk eight of the next 10 batters, with the streak broken only by an error that allowed a run to score and an RBI groundout by K.G. Fisher.

Lily Crum capped Cathedral’s big inning with a two-run single that made it 14-2.

Crum finished the game 2-for-4 with two RBIs. Dunbar went 2-for-2 with a home run, double, one walk, five RBIs and three runs scored.

PCA did scratch back two runs in the bottom of the second inning, and two more in the third to avoid the 15-run mercy rule. It nearly kept the game going in the fourth as well, by scoring three runs to cut it to 21-9.

Crum, Cathedral’s third pitcher of the game, finally coaxed a bases-loaded grounder off the bat of Marley Bufkin to end it. Even so, Upton said she was proud of her team for not giving up when they easily could have.

“We’re young. We’re going to make those errors. It’s how you come back from them,” Upton said. “If we just keep on fighting back, we’re going to be something. It’s still early.”

PCA will go to Natchez on Saturday to play in Cathedral’s early-season tournament. The Lady Eagles will play Franklin Academy and Centreville Academy at 10 a.m. and 1 p.m., respectively.