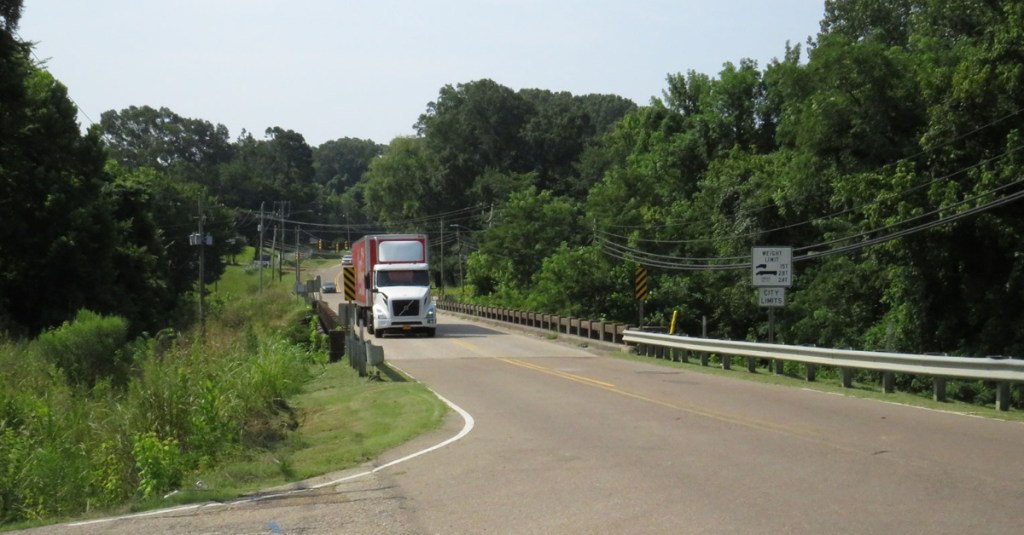 An 18-wheeler travels across the Hatcher Bayou bridge on Fisher Ferry Road. The city is applying for state emergency road and bridge repair funds to make improvements to the bridge. (Photo by John Surratt | The Vicksburg Post)

The city of Vicksburg is asking the Mississippi Department of Transportation for help to correct a problem with the Hatcher Bayou bridge on Fisher Ferry Road.

The Board of Mayor and Aldermen Monday approved a resolution seeking money from MDOT’s State Emergency Road and Bridge Repair Fund for improvements to the bridge.

The bridge is north of the entrance to Sports Force Parks on the Mississippi on Fisher Ferry, which is the main access road to the sports complex.

The amount of money the board will receive for the work has not been determined pending recommendations by Stantec, which the board hired at a cost not to exceed $7,500 to evaluate the bridge’s problems.

City Public Works Director Garnet Van Norman said there is an erosion problem on the bank of the bayou downstream from the bridge behind a house. Structurally, he said, the bridge is fine but it isn’t big enough to handle the car and foot traffic caused in part by the sports complex.

“We just have a lot of heavy traffic on it,” he said. “It isn’t big enough; we don’t have a pedestrian walkway. We’ve got people walking in the street to the (convenience) store at Fisher Ferry and Halls Ferry. It’s got a lot of issues with it.”

“I’m told they have people walking out to the store while tournament play is going on (at Sports Force),” South Ward Alderman Alex Monsour said Monday. “We need to enhance what we’ve got out there.”