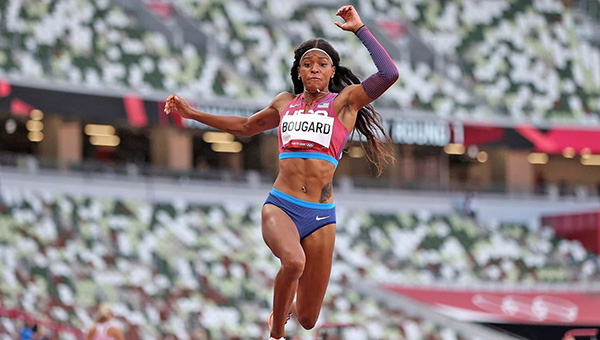 TOKYO — Erica Bougard’s quest to be the world’s top female athlete sputtered down the stretch, and she had to settle for simply being among the best.

The former Mississippi State track and field star finished ninth in the women’s heptathlon at the Tokyo Olympics on Thursday, after she was in second place at the end of the first day of competition.

Bougard’s 6,379 points were 211 shy of podium pace and 412 short of the Olympic champion, Belgium’s Nafissatou Thiam.

Thiam successfully defended her Olympic title as a seventh-place finish in her heat in the last event, the 800 meters, was enough for her to take the gold with 6,791 points. She won ahead of Dutch pair Anouk Vetter in silver (6,689) and Emma Oosterwegel in bronze (6,590).

After a strong start on the first day that had her in silver-medal position, Bougard, who was born in Memphis and grew up in Byhalia, couldn’t hit her stride Thursday in some of her best events. The former national champion neared a personal best in the javelin, then struggled in the long jump and 800 meters.

Bougard’s second day began with a 19 feet, 10 3/4 inches effort in the long jump, which was good for 868 points. Her career best of 21-8 3/4, however, would have given her more than 1,000 points. She tossed the javelin 152 feet, 10 inches, which landed just shy of her personal best and one point off her career-best point total in the event.

The American needed to make up more than 200 points in the 800 meters, and entered with the quickest career best in the field. She led her heat through 400 meters, but faded to finish 11th in 2:15.92, more than seven seconds and 100 points off of her best.

The last American to win an Olympic heptathlon medal was Hyleas Fountain in 2008.

Bougard was the best finisher among four former Mississippi State athletes in the Tokyo Olympics.

Marco Arop reached the men’s 800 meter semifinals before finishing 14th, and Brandon McBride bowed out in the preliminaries to finish 29th. Both runners were competing for their native country of Canada.

Anderson Peters and Curtis Thompson competed in the men’s javelin, but neither advanced to the finals. Peters finished 15th and Thompson 21st, respectively, with the top 12 throwers making the cut for the final round. Peters was representing Grenada, and Thompson the United States.

In the women’s 1,500 meters, former NCAA national champion Marta Pen Freitas — who was competing for Portugal — reached the semifinals before bowing out of the competition.

Reese, a Gulfport native competing in her third Olympics, won her third medal in long jump. She jumped 22 feet, 10 1/2 inches (6.97 meters), but lost out on the gold medal when Germany’s Malaika Mihambo jumped 7 meters even on her final attempt.

The winning margin of 3 centimeters was the third-closest in Olympics history.

Reese won the gold medal at the 2012 Olympics in London, and silver in Rio de Janeiro in 2016. She joined American Jackie Joyner-Kersee and Germany’s Heike Drechsler as the only women to win three Olympic medals in the long jump. The 34-year-old Reese said before the Tokyo Games that this would be her final Olympics, although she might still compete on the world circuit.

While Reese left Tokyo satisfied, Saunders’ week was filled with personal tragedy and controversy.
At the medal ceremony for the women’s shot put on Sunday, Saunders stepped off the podium, lifted her arms above her head and formed an X with her wrists. Asked what that meant, she explained: “It’s the intersection of where all people who are oppressed meet.”

Then, on Wednesday, Saunders’ mother died.

Media reports say that Clarissa Saunders died in Orlando, Fla., where she had been attending Olympic watch parties.

The shot putter wrote on her Twitter account that “my mama was a great woman and will forever live through me. My number one guardian angel.”

The International Olympic committee was investigating whether Saunders’ gesture on the podium violated a prohibition on political statements at medal ceremonies, but suspended the investigation after Saunders’ mother’s death.

Spokesman Mark Adams says the IOC “extends its condolences to Raven and her family.”

Souza helped Brazil reach the quarterfinals of the women’s soccer tournament before losing to Canada in a shootout.

Kendricks, who won the bronze medal in the men’s pole vault in 2016, tested positive for COVID-19 last week and had to withdraw before his competition began.