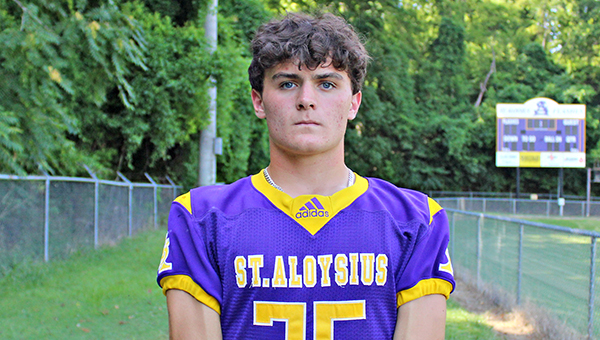 St. Aloysius running back Adam Francisco scored three rushing touchdowns in a 28-7 win over Silliman Institute in a preseason scrimmage on Friday.

After he’d pushed them for two full weeks of two-a-day practices, St. Aloysius football coach Bubba Nettles joked, he felt like his players were ready to vent some frustration.

Silliman Institute wound up on the receiving end of a lot of it.

“We still have a lot of work to do and improvements are necessary everywhere, but after two full weeks of two-a-days they were all chomping at the bits to hit someone else,” Nettles said. “I’m sure each player had my face imagined on each of Silliman’s players.”

Each team ran three series of 10 plays starting on its side of the field, plus another period starting near the opponent’s goal line.

Francisco’s three touchdowns all came during the goal line portion of the scrimmage. Nettles said the Flashes focused more on controlling the ball on offense, although the long touchdown pass from Wilbanks to Liggett showed they have some big-play potential when they need it.

“We controlled the line of scrimmage. Ran the ball at will. We just ran out of plays, which is our philosophy. Establish a hard-nosed running attack and control the tempo of the game,” Nettles said. “Tristan did a great job commanding the offense, and when we decided to spread it out a little and throw it, he was money. Padre Gray and Adam Francisco are a two-headed monster in the backfield.”

Nettles was St. Al’s defensive coordinator before taking over as head coach this season, and he naturally gushed about his players on that side of the ball.

“The defense was lights out,” Nettles said. “Chase Tucker, Thomas and Will Dowe are ferocious at linebacker. Damien Reeves, Jax Oglesby and Josh Larsen controlled the line of scrimmage as defensive linemen.”

Silliman has quickly turned into one of St. Al’s favorite opponents. The Flashes beat them 38-0 in the 2020 regular season to begin a late-season turnaround that resulted in a berth in the MAIS Class 5A playoffs.

Friday’s scrimmage did not count in the standings, but should provide a nice morale boost heading into the regular-season opener on Aug. 20 at Park Place Christian Academy.

St. Al will not play another scrimmage next week.

“I am extremely grateful for the work my staff has done with these young men,” Nettles said. “We are teetering on the edge of something special, but we have to be careful and not teeter the opposite direction into disaster land. Our schedule is tough, probably close to the toughest in 4A. We have to continue improving every day and I know we will.”