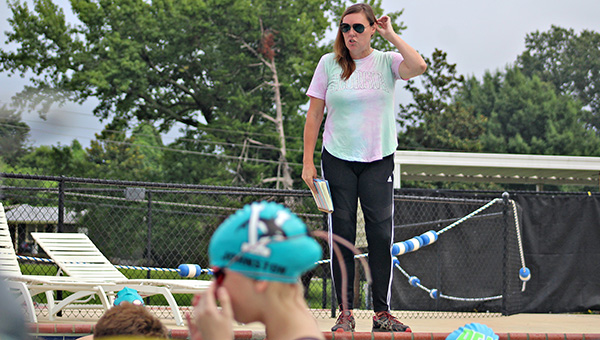 Elizabeth Nelson gives instructions to the St. Aloysius swim team during their practice Tuesday at the Wilkinson-Ver Beck YMCA. Nelson, a Vicksburg resident who swam in the 1995 Pan American Games, was serving as a guest coach for the team's practice. (Ernest Bowker/The Vicksburg Post)

On its first day of practice, St. Aloysius’ swim team got pointers from a pro.

Elizabeth Nelson, a Vicksburg resident who competed in the 1995 Pan American Games, stepped in as a guest coach for St. Al’s first practice of the season.

“It’s incredibly helpful. It’s not very often that you have someone with her experience and her skill level who happens to live less than a mile from the pool where you practice,” St. Al coach Wilson Carroll said. “We’re thrilled that she was willing to come out and spend some time with our kids, and we’re hoping she’ll come back and do it again.”

Nelson moved to Vicksburg from Texas several years ago, when she and her husband Don bought The Stained Glass Manor on Drummond Street. One of their new neighbors was Carroll, and they struck up a friendship.

Nelson and Carroll shared a passion for swimming, but Carroll said he had no idea how accomplished Nelson was until recently. Nelson finished fourth in the 100 meter breaststroke at the 1995 Pan American Games — a miniature summer Olympics for athletes from North and South America — after swimming at the college level at Georgia and Texas.

“It took me a while to realize exactly who she is and what she’s done. In fact, I had never seen her full resume until a week ago,” said Carroll, who is in his first year as St. Al’s coach. “I knew she had swam at Georgia and Texas, but I didn’t know she was a nationally-ranked swimmer. I’m in awe, frankly, of what she’s done and what she can do.”

Nelson’s busy schedule prevents her from coaching on a full-time basis, but she was happy to step in for a one-off clinic on Tuesday morning. She put the 20 members of the team through some drills during their morning workout at the Wilkinson-Ver Beck YMCA.

“I was really excited,” Nelson said. “I’ve always been involved in swimming. My mom taught swimming lessons at our house when I was growing up, and then I competed. It’s been a while since I competed, but I do still stay in close contact with my old teammates.”

Nelson said she tried to keep things simple for her stint as a guest coach. Her two-hour clinic including drills on technique and body position, both simple things that she said translate to any level of swimming.

“Those great, elite swimmers are working using the same drills. They may be doing a little more yardage, but the same principles apply,” Nelson said. “They’re just getting into the season so we’re not going to overdo it. We’re just going to do a little technique work and have some fun.”

St. Al’s first meet is Aug. 16 in Jackson, against Cathedral and Madison-St. Joe. It will have one meet per week until the Mid-South Association of Independent Schools Championship on Sept. 29.

St. Al is still the defending MAIS champion in swimming. It won the team title in 2019, and no state meet was held in 2020 because of the COVID-19 pandemic.

Carroll is hopeful that Nelson’s lessons can give the Flashes a bit of an edge as they head into the 2021 season.

“She mentioned that when she was a swimmer, her biggest breakthroughs came during clinics when she could break away from her normal routine and work with a new coach at a different pool who had national or international experience,” Carroll said. “That’s sort of what we’re hoping will happen here. Some of these kids who have swam for years with VSA or St. Al might have a breakthrough with the advice she can give.”